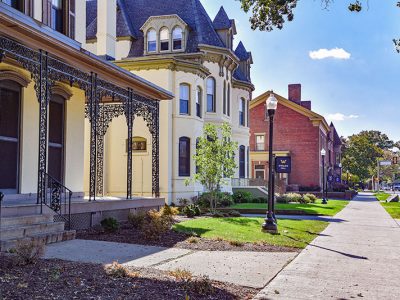 An Architectural Tour Through Wilkes-Barre’s Past

See NEPA’s past at the River Street National Historic District. The center city district parallels the Susquehanna River. It consists of stately residential and converted commercial buildings — some dating back as far as the 1860s. The district offers a look back to Wilkes-Barre’s once prominent wealth and influence throughout the height of the Anthracite coal boom.

Notable features on the north side of the district include the Luzerne County Courthouse and the famous Irem Temple. The south end of the district boasts the iconic YMCA building and the Osterhout Library. The Luzerne County Historical Society Museum features detailed descriptions about many of the historic district’s homes. The district covers 191 acres and contains 258 buildings in total. You’ll never run out of places to explore at the River Street National Historic District.