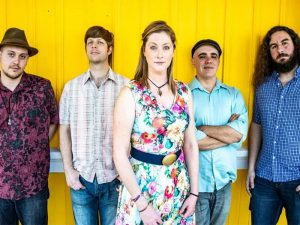 Hailing from the mountain towns of Pennsylvania, West Virginia, and Maryland, The Jakob’s Ferry Stragglers draw freely from Old-Time, Bluegrass, Rockabilly, and Swing music to create their own brand of high energy, Appalachian Bluegrass. Gary Antol (guitar/vocals) and Libby Eddy (fiddle/vocals) founded the band in 2014 with a very simple goal: write good songs, honor the music, and take it to the road. In the time since, Jakob’s Ferry Stragglers has performed in clubs across the country and appeared at festivals including Delfest, Grey Fox, Delaware Valley Bluegrass Festival, and many more.

Moving forward into 2020, after three well-received studio efforts, the Jakob’s Ferry Stragglers are eager and ready to release their first live album into the world, titled “The Straggle is Live”. Aptly named by an enamored fan, the album is a curation of the group’s greatest hits and was recorded live at The Church Recording Studio by Dana Cannone. The set was performed on 10/9/19 with a private, invite-only intimate audience. It was mixed & mastered by Will Shenk at Metier Mastering in Front Royal, VA.

Rhythm and Brews: The Secret Reasons

All Shook Up! Presented by The Wolfpack Players

Ballet by the Beach

All Shook Up! Presented by The Wolfpack Players