NEPACMS proudly presents an evening of chamber works for double bass with world-renowned bassist and Eastman faculty member, James VanDemark. A stunning virtuoso on the double bass, James VanDemark was hailed by the New York Times at his Lincoln Center recital debut as “an exceptionally gifted string player and a musician of taste, intelligence and the best spontaneous musical instincts, with an unerring sense for exact intonation.” He has also been profiled by Connoisseur magazine, the New York Times, on PBS’s MacNeil/Lehrer NewsHour, National Public Radio’s Morning Edition and All Things Considered, and in the Lakota Times, the largest Native American newspaper in the United States. 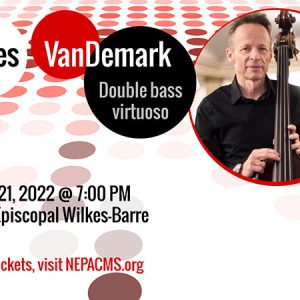 Music at the Moor

Rockin’ by the River