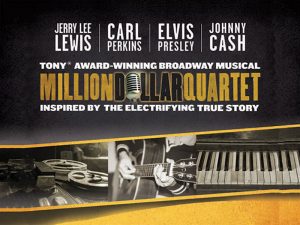 On a Tuesday night shortly before Christmas 1956, four legends – Johnny Cash, Jerry Lee Lewis, Carl Perkins and Elvis Presley – gathered at the Sun Records studio in Memphis Tennessee, where they’d launched their careers. Word soon leaked out of an impromptu jam session. A newspaper man who was there wrote, “This quartet could sell a million.” Soon, they were dubbed the Million Dollar Quartet. This was their only performance, a cultural flashpoint that caught rock n’ roll at the moment of creation.

Stick With Us Food Festival