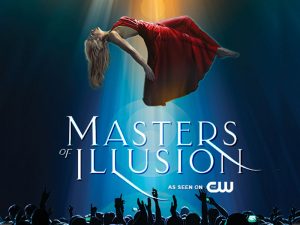 Master of Illusion is a huge stage phenomenon born from the multi-award-winning television series. The hit TV show is currently in its 6th season on the CW Network and can be seen Friday nights at 8/7C.

Masters of Illusion performs live around the world and across the US and has been seen by over 100 million viewers on the CW network as well as in 126 countries.

Starring the world’s greatest award-winning magicians, this 21st century magic show is perfect for the whole family – a show filled with modern jaw-dropping grand illusions, arts of deception, comedy and audience participation all performed live on stage in front of their very eyes.​

The live tour premiered in September 2011 and is now in its 9th season.