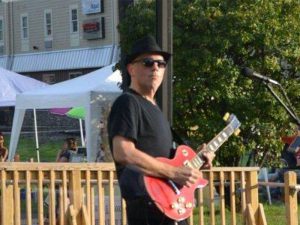 Chris London takes the stage for the Community Concert Series.

Since 1973, Chris London, has shared his high energy, passionate pursuit of classic originals, essential blues, & vintage rock ‘n roll with audiences all over the place.

As a guitarist/songwriter/singer/producer, London, based in Northeast PA, is known as one of the region’s finest blues-rock guitarists with a fiery style that really connects. He draws from an extensive repertoire of classic craft roots, rock, and blues, showcasing his expert guitar and stylistic vocals and satisfying his audience.

Chris London’s original music is described as “new classics,” and his songwriting for the band, Friar’s Point, established their reputation as the region’s most original blues band, leading them to record at the legendary Sun Studios, in Memphis TN. Chris has released several albums as a solo artist and with Friar’s Point Band. Chris London’s latest release, “Classic Originals,” 40 song compilation, chronicling his best so far.

The community concert series is Shawnee’s gift to the community. Concerts are held rain or shine. Donations to the artist are greatly appreciated.

The Stage in Our Woods