NEPA’s railroads were once the nation’s lifeline, transporting coal and iron from the Valley and fueling the industrial era. The days of mines and mills are long gone, but the old rail lines are still at the heart of the community thanks to the Lackawanna River Heritage Trail. This multi-purpose trail begins in Pittston, meanders through the Scranton suburbs and connects to the D&H Rail-Trail, which extends all the way to the New York State border.

The trail generally has a relaxed grade and gentle surfaces like pavement, crushed stone and earthen paths. With dozens of trailheads, it’s easy to hop on the trail for a walk, run or bike ride. You’ll discover surprises around every corner, like neighborhood parks, historic sites and locally-inspired artwork. And no matter how many miles you cover, you’ll be surrounded by the natural beauty of the Lackawanna River, which was named Pennsylvania’s River of the Year in 2020.

The Lackawanna Heritage Valley Authority (LHVA) manages the trail from Pittston to Simpson, which is the portion that we’ll explore today. Before you head out, visit their website for maps, trailhead locations and a downloadable guidebook. 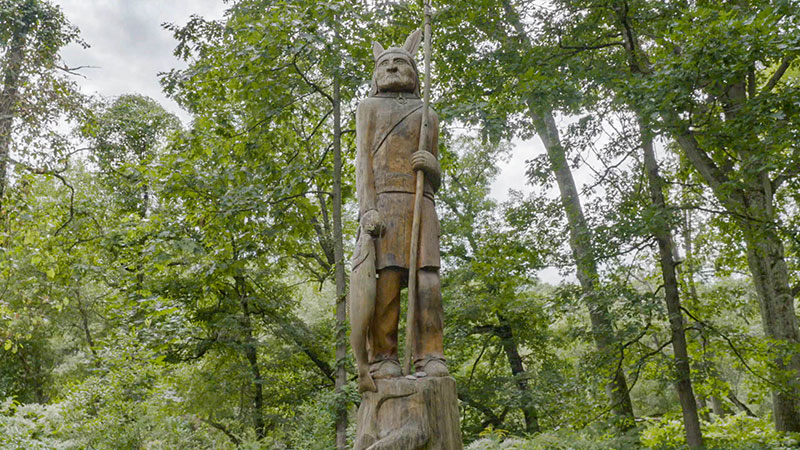 The adventure begins where the rivers meet.

The Heritage Trail begins in Pittston, where the Lackawanna River flows into the Susquehanna. The southern terminus is on Kennedy Boulevard next to the old Cooper’s Waterfront building. This section of the trail mainly follows existing roadways as it passes through Pittston, Duryea, Old Forge and Taylor.

For a taste of NEPA’s foodie scene, stop for a snack in Old Forge and try the town’s iconic pizza. Each rectangular “tray” has a crust that’s crispy on the outside and doughy on the inside, with a slightly sweet sauce and gooey blend of cheeses. The trail goes right down Main Street, so you’ll be able to hit practically any of the town’s famous pizza parlors.

As you approach Taylor, leave the roadway and take the scenic route on the Central New Jersey Expansion, a shortcut that connects Depot Street in Taylor to the Elm Street Trailhead. This two-mile stretch pays tribute to the local Native American history with a sculpture of a Haudenosaunee chief, the Six Nations Amphitheater and stone carvings of animals.

The trail transitions to an urban vibe.

This portion is a mix of wooded rail-trail, the Scranton Riverwalk and paths along the levee system. The past meets the present on this part of the trail. One minute, you’re passing the historic remains of factories and collieries, and then you round a bend to discover a larger-than-life mural.

It’s easy to take a side trip into downtown Scranton. Take a deeper dive into the trail’s history at attractions like the Steamtown National Historic Site, the Scranton Iron Furnaces and the Electric City Trolley Museum, which are just a short bike ride away.

Make a detour on Barring Ave to visit the Scranton Co-Op Farmer’s Market, which is open from mid-July through Thanksgiving. Or cross over the Poplar Street bridge and admire the river at Sweeney’s Beach, a popular spot for kayaking and fishing. Further down the line, you’ll pass the Nay Aug Avenue Natural Play Area. This one-of-a-kind park includes a kids’ bike track, playhouse and a wheelchair-accessible glider. 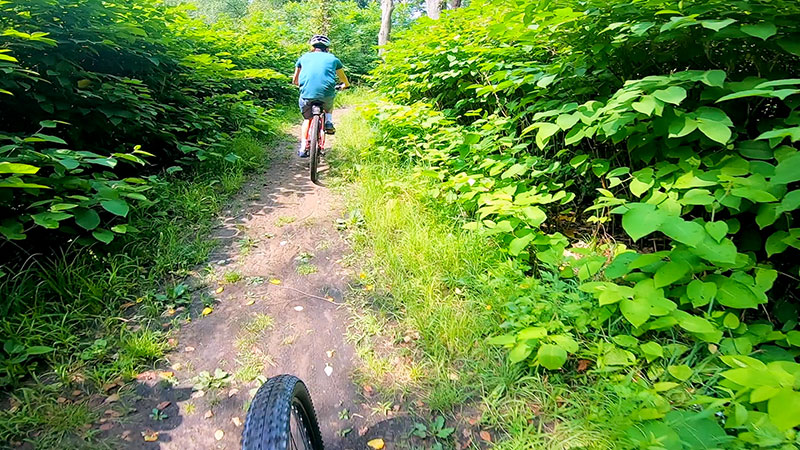 From Scranton, the trail leads to smaller towns like Dickson City, Throop, Olyphant, Blakely, Jessup, Archbald and Jermyn. The trail consists of shared roadways from Parker Street in Scranton to Olyphant, with some additional on-street sections in Jessup and Blakely. Otherwise, it’s a smooth ride of crushed stone and pavement.

The trail passes several neighborhood parks, so stop to stretch your legs, enjoy a picnic or spend the afternoon with the kids. Trailheads are located at Bernard Seminski Memorial Park in Dickson City, Condella Park in Olyphant and the Blakely Borough Recreational Complex in Blakely.

As you leave the bustle of the city behind, keep your eyes peeled for wildlife. It’s not uncommon to spot river otters, beavers and bald eagles. 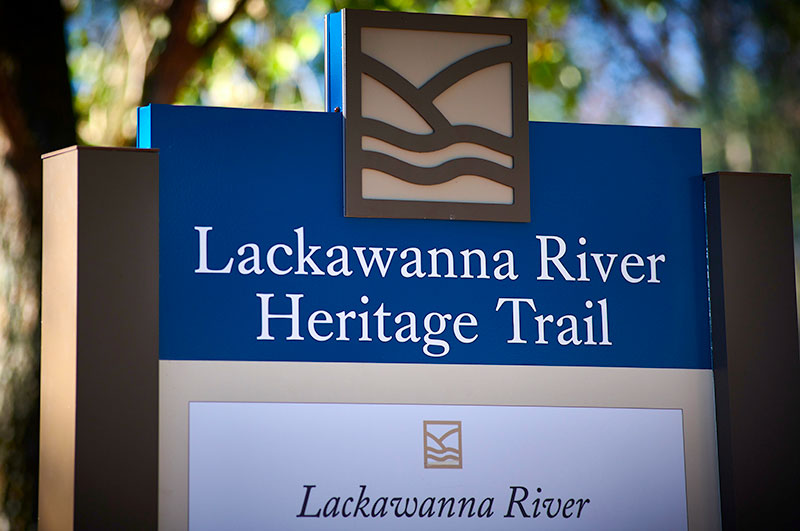 The journey continues through the northern reaches of Lackawanna County.

Most of this route is shared roadway, with some shorter, off-street sections. From Jermyn, you’ll pass through Mayfield and go straight through downtown Carbondale. The trail takes you right down Main Street, passing the stately city hall and courthouse building, which was built in 1894.

As you continue north, you’ll reach Simpson, where the Heritage Trail merges with the D&H Rail-Trail. You can also set off on a new adventure on the O&W Rail-Trail, which begins on the other side of the river.

The D&H Rail-Trail: Simpson to Lanesboro 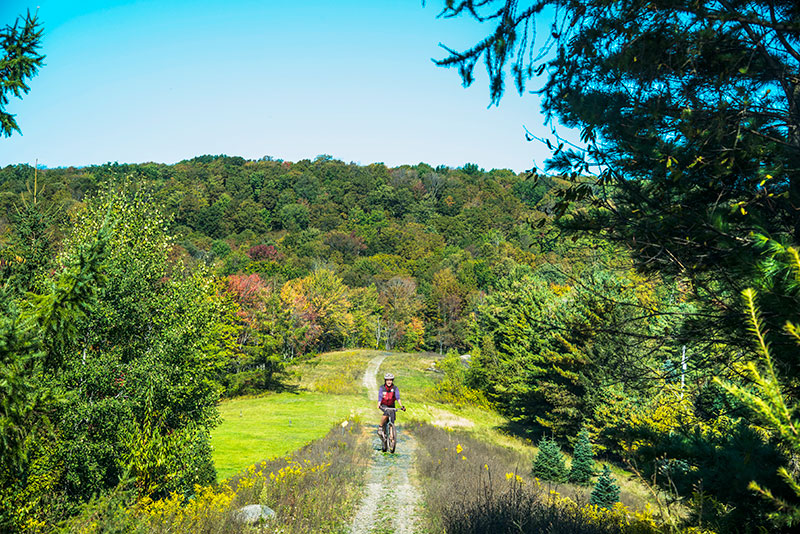 Rolling mountains and rustic farmland will lead you all the way to the New York border.

The Heritage Trail connects seamlessly with the D&H Rail-Trail, which is managed by the Rail-Trail Council of NEPA. For 38 miles, this trail will guide you through the NEPA countryside until you reach the state border. You’ll pass through rural towns like Vandling, Forest City, Union Dale, Herrick Center, Ararat, Thompson, Starrucca and Lanesboro.

The entire trail is great for hiking and biking, and some portions are open for horseback riding and snowmobiling. There’s so much to see, from railroading ruins to arching viaducts. Stay tuned for an in-depth overview of this amazing trail.

Keep the Heritage Trail Beautiful for Years to Come

You can support trail maintenance by donating to the Lackawanna Heritage Valley Authority or becoming a volunteer. Visit their website and follow them on Facebook for trail resources, news and events.

Sights & Stops Along the D&H Rail-Trail