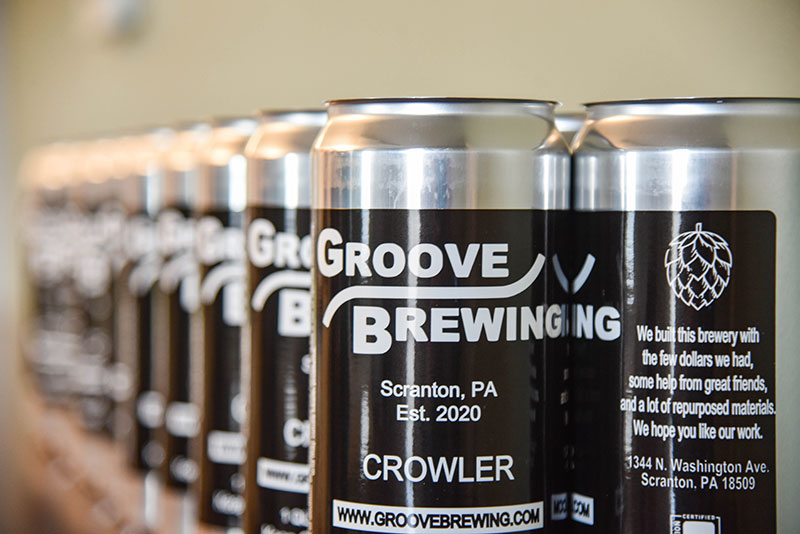 The name seems simple enough. You might even venture to think, “Oh, I’ve got it figured out.” Maybe they like to jam out with some P Funk while brewing. Or, perhaps it’s got something to do with baseball. “Did one of these guys pitch for the Red Barons?” Nah. Strike zones and smooth bass tones aside, Groove Brewing goes a little deeper than that. It’s enigmatic and a bit metaphoric. It communicates minimalist and somehow simultaneously beams us into some grand cosmic conversation about time and natural forces that dance just barely within our comprehensive grasp.

Groove Brewing occupies one of those old Wyoming Valley specials on North Washington Street in Scranton. It’s a house – a standard two-story. There’s a basement dug into the hillside and a formidable flight of wooden stairs from the street to the front porch. There’s little to set it apart from most other houses in the neighborhood. Save for the fact that they’re cooking up beer inside. It was formerly a dentist’s office, and before that, likely home to some hard-working family. And, prior to them – another and then another and so on.

This town and these people connect in that way. It starts with the family and pulses outward. It’s not all peace and love – pride, maybe. You stand with your neighbors, love em’ or hate em’. Then, it’s about your street. And then your neighborhood. And outward it radiates to your city. You come to Scranton, whether it’s Parade Day, or some random Tuesday, you learn quick that this city belongs to its people. 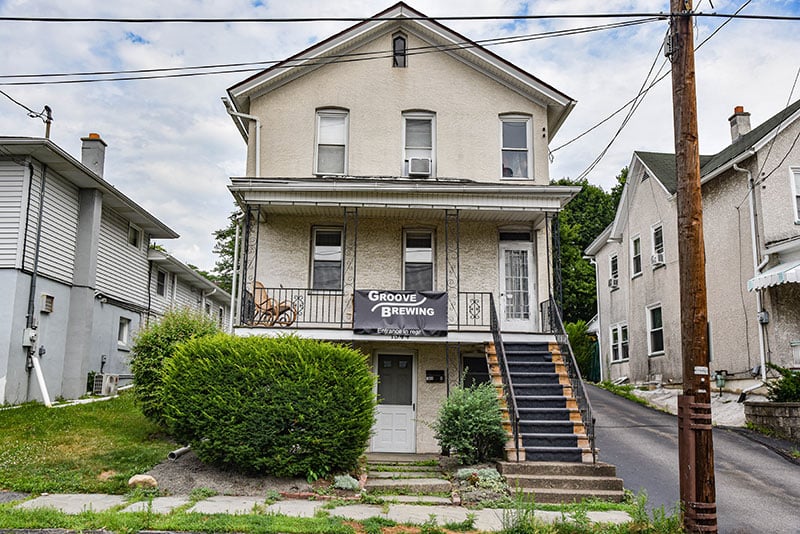 Pine Brook is one of those mut neighborhoods we’re so famous for here in the valley. You got duplexes and double blocks. There are corner pizza shops and a handful of dives here and there. The neighborhood isn’t exactly suburban, and it’s certainly not downtown. It’s one of those catch-all’s, where banks and butchers sidle up to body shops and restaurants. There’s a little bit of everything – a “good mix” as they say. These are the remnants – all tethered in some way to the city’s industrial roots. It’s just good people getting by. That’s the NEPA way. And there we go again, radiating outward.

Pull back that view a bit, and we start to make sense of the brewery’s clever name. This city, this valley, in a grander perspective, lies within the prehistoric corrugation of the great Appalachian Valley. From Alabama to Canada, those clustered ridge lines and ancient sea stone peaks mark America’s legendary eastern scar. The geological footprint is largely linear. A little bump and rub between continental plates over millennia – the earth pleating under nervous cosmic fingers – laid out an accordion’s bellows of almost uniform folds. 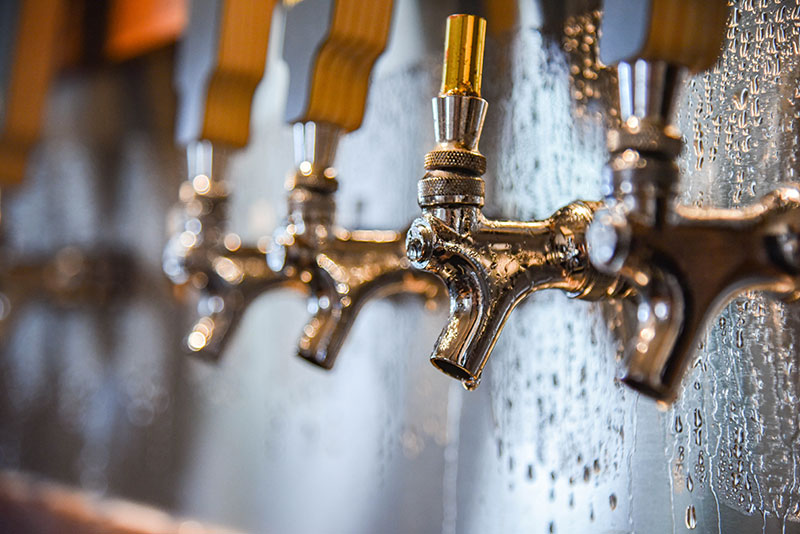 There is, however, an exception – an anomaly. Always, right? The ridges and valleys rippled out nearly 100 to 300 miles across all along the mountain range’s reach. Somewhere around Northeastern PA, there’s a brief change in direction – an almost violent course correction. It’s small scale, no doubt, but once you see it, you can’t unsee it. It’s a great glacial valley. In fact, you might call it a groove. In the center of it all – that’s NEPA. Zoom in. At the center of that – that’s Scranton. Go deeper. There, in the corner, that’s Groove Brewing.

They’re not following some predetermined, prehistoric path. Like their hard-working neighbors here, they’re scrapin’, grindin’ and groovin’ at their own pace. And, yeah, they’re making some great beer in the process.

Let’s go take a tour and tip a few, shall we? 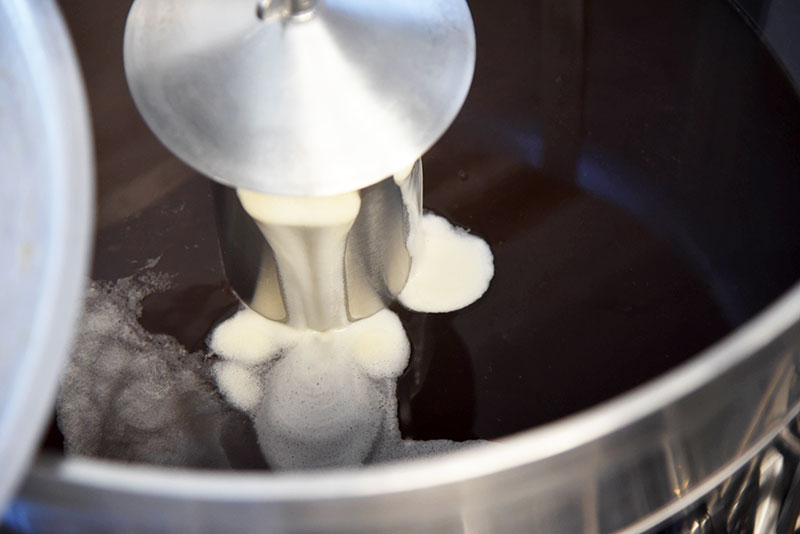 The brewhouse at Groove Brewing sits tucked away, underground, in the basement. Yeah, it’s a tight squeeze. But it has those creeky stairs and that cold concrete floor that brings you back to somewhere familiar. Just enough natural light creeps through a few windows to remind of a world in motion outside. It breathes a little of that life into the white walls and shimmering tanks and tubes. It finds its way into forgotten corners where beakers and measuring cups crowd every inch of counter space. Unwitting soup spoons lie in, what I imagine, is some confused state over their enlistment in the cause.

The entire space exists in some realm between cave, evil laboratory, grandpa’s messy workshop and grandma’s warm, cozy kitchen. And, when one endeavors to make beer for their living, this is precisely the kind of place to do it. 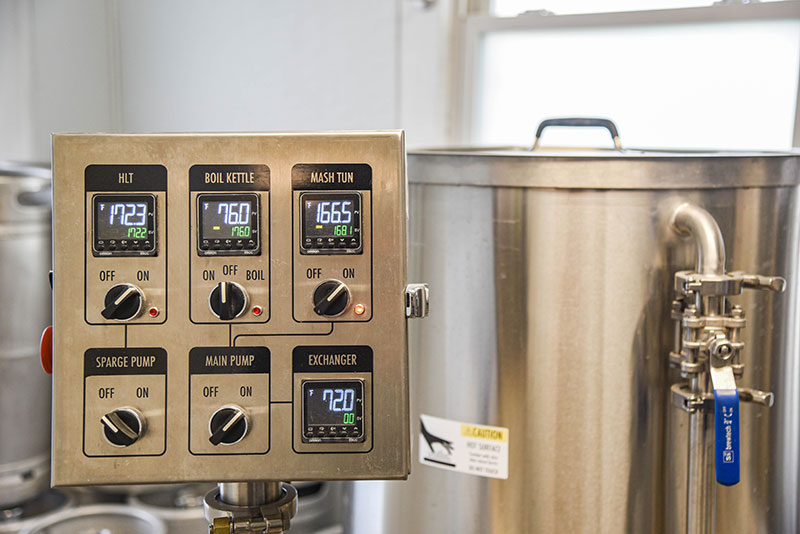 Small rooms tend to envelop the senses and ignite the imagination. In short time, we’re noticing a bready, cereal quality to the air. Yeast starters swirling away on stir plates contribute a rhythmic trance. Things are boiling and foaming. Sneakers squeak from task to task. The brewmaster, in a fury of creative energy and sweat, conducts these moving parts in some otherworldly mastery over his domain. The brewhouse and all the things in it seem to liquify around him. The man becomes his tools, becomes the process, becomes what he creates.

And off it rises – this momentary synergy of love, labor, hope and inspiration. It flavors the draft sweeping up the stairs toward the open cellar door. Then, it seeps into joists and floor boards and courses through the sinew of studs holding it all together. It’s spelled out in clever phrases on a slate and poured over and over in smiles and laughter.

Now let’s have a look upstairs at that taproom and see if we can pinch a few beers. 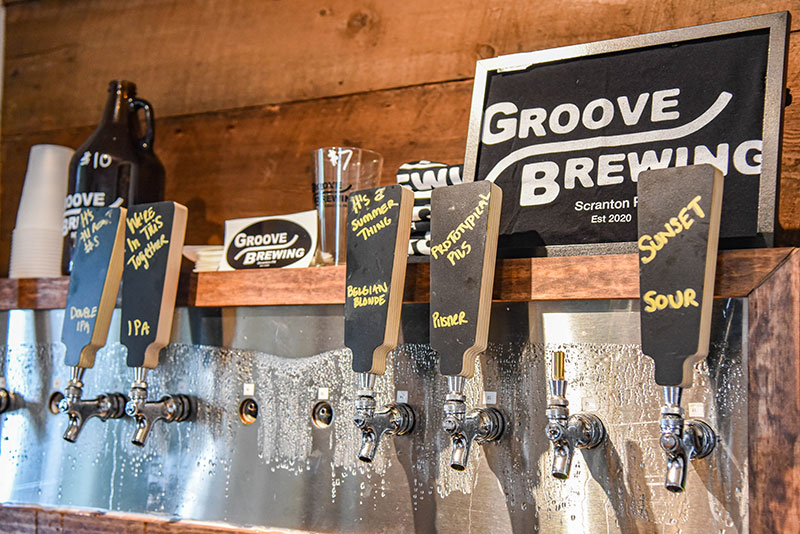 If your best friend put a bar in his living room…

Groove Brewing’s taproom capitalizes on coziness. It’s essentially just a simple, understated room. There’s little in the way of flash, pomposity, or overt generationally-targeted appeal. This is a home, in a neighborhood and you’re welcome to it. I imagine that’s how this place has always been (except during that stint as a dentist’s office).

The old house tells its story in thick paint and plaster patches. The room’s centerpiece is a stand-alone brick chimney. Opposite that, you’ll find a small bar tucked into the wall. It’s mainly for pickups – as there’s little room for resting elbows. Rough-finished wood panels and trim offer a cabin-like warmth to the otherwise bright space. Small tables and a handful of chairs fill out the room. A handy beer rail runs the length of the front half. An adorable alcove with a wrap-around wood bench sits just to the left of the entry. This “nook” as we’ve dubbed it, is the coolest spot in the house – until you head out to the garden, of course. 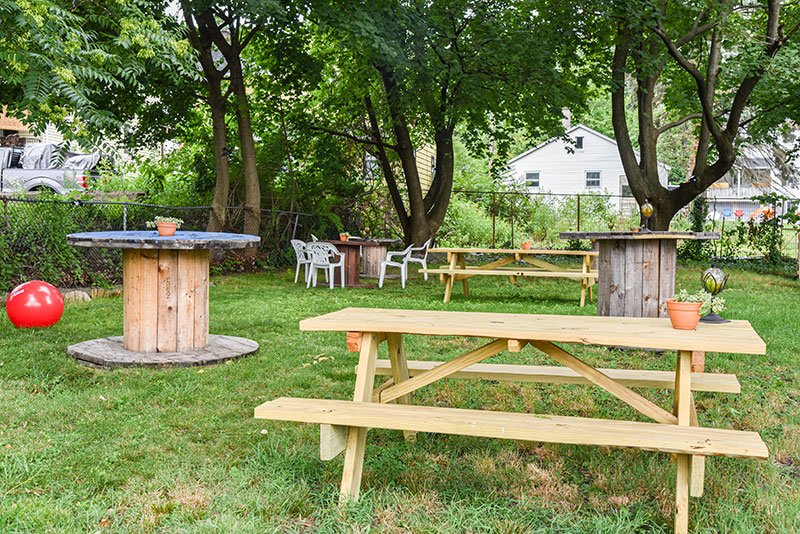 The covered back porch allows room for a couple patio tables. Beyond that, just on the other side of the small parking lot, you’ll find Groove’s finest amenity – the backyard. The massive, fenced-in patch of grass features plenty of shade and picnic tables. Reclaimed wooden cable spools and classic plastic patio chairs dot the landscape. The wide-open space features trees, green grass, room to spread out and the unmistakable sense that you’re kind of out of the way, but also in the middle of a city neighborhood.

The yard’s minimal design mimics the brewery’s overall “let’s just keep it simple” vibe. Plus, it exudes nostalgia. Quite often, during our visit, I found myself slipping into a daydream, or a bout of déjà vu. I knew this yard once. I had a tree fort over there in the corner. And that’s where I buried my G.I. Joes – this one still has a little pain attached. Tear-jerking Toy Story moments aside, Groove’s backyard offered a momentary escape from the little bothers that so commonly plague us. And that’s exactly what we’re asking a brewpub to do, isn’t it? 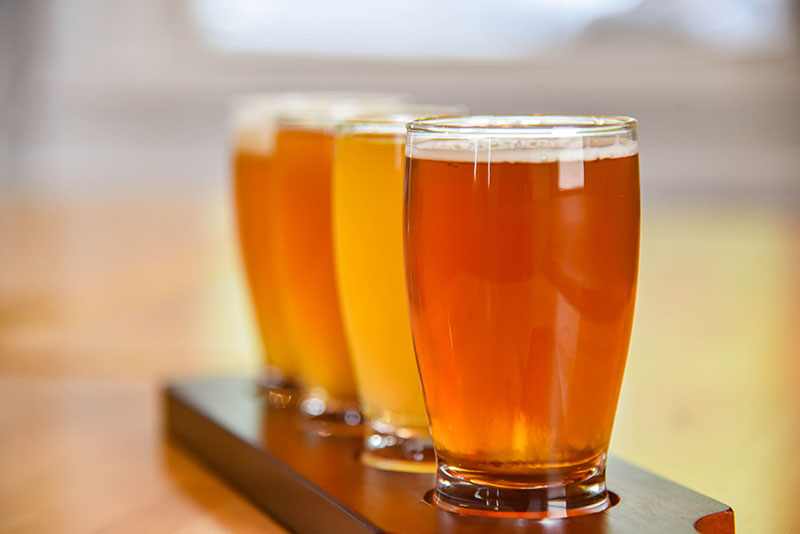 You’re not going to find a long tap list, or some goofy line up of IPAs at Groove Brewing. They keep things simple. Some of that philosophy is influenced by the limits of physical space. Less room means less beer. These are the brutal economics of craft brewing. The other side of their “less is more” mentality derives from a staunch adherence to one simple idea – no repeating. Sure, that’s easier said than done, but, so far, they’ve stuck to it. And there’s no plan to abandon the principle in the near future. Someday, they inevitably will, and we’ll just have to decide then if we’re willing to forgive them. For now, enjoy the wild ride and the fast-paced rotation of new beers.

They’ve always got four or five beers on tap. As seemingly required by law, there is the ever-present IPA. So far, several months removed, I’ve tried two of them, and they were both spot on. From there, the brew master displays a rather deft hand with lagers, fruited sours and just about anything else on the beer spectrum. You’re looking at over 25 years of homebrewing experience here. I mean, seriously, is there anything a homebrewer won’t try?

Side Note: Groove also plays around with seltzers. All I can say is that it tastes like seltzer. So, if you’re into that, there you go. Also, through a couple of local partnerships, they serve selections from Space Time Mead and Cider Works and Barnyard Cidery. 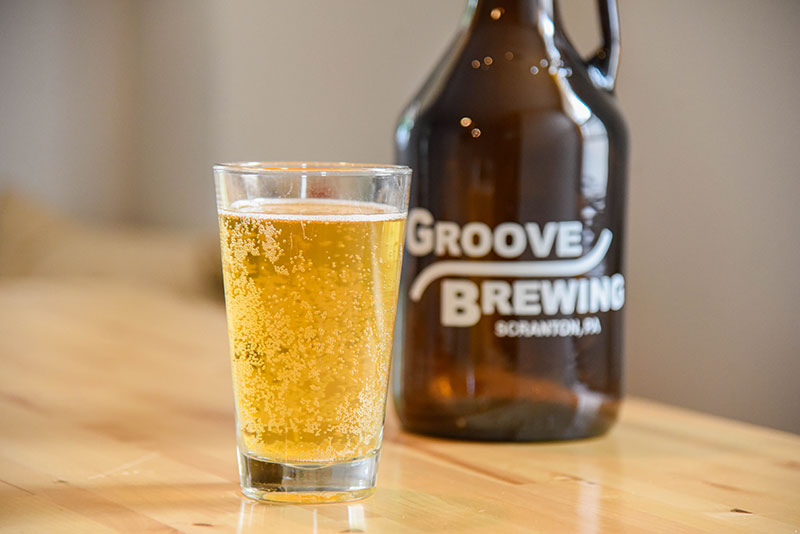 Back to the beer. On this particular visit, we opened with Second Beer, a white IPA. This pale golden beauty was an easy drinker even at 6.9%. It blended sweet citrus with subtle notes of spice. Summer was just coming to an end during our visit, but this beer brought us right back to that sunny place. Next, we moved on to Swanee, their rendition of classic cream ale. It poured with an amber tint, a gorgeous, velvety head and a little of that bready/spicy lager twist. And, don’t worry, you’ll still get that lightly bitter ale kick toward the end. We rounded out the day with Baby Brought Watermelon, a kettle sour featuring everybody’s favorite big dumb summer fruit. This delightfully crushable beer takes its name from possibly one of the greatest movies of all time. Figure out what it is, and, I promise I’ll buy you a beer next time I see you. By the way, they got this one right. It’s tart/sweet balance and fruity aromatics are up there with the best of them.

Secret stuff: We also conned our way into a few samples of Robust Porter (straight from the conditioning tank). This gorgeously dark porter toed the line somewhere between roasted coffee and dark chocolate. It was creamy, moderately bitter and seemed to envelop your head in a cloud of chocolatey/fruity aroma. Look for it this fall.

We popped by Groove Brewing in mid-September. They were busy. The yard was still green. And, curiously, as we chatted, a massive outdoor tent and a few heaters arrived. They must be up to something. Anyway, they welcomed us heartily. We had a thirst. They had cold beer. And, somehow, everything tended to work itself out. If you happen to find yourself hanging out in Scranton, make it worth your while and stop in for a pint.