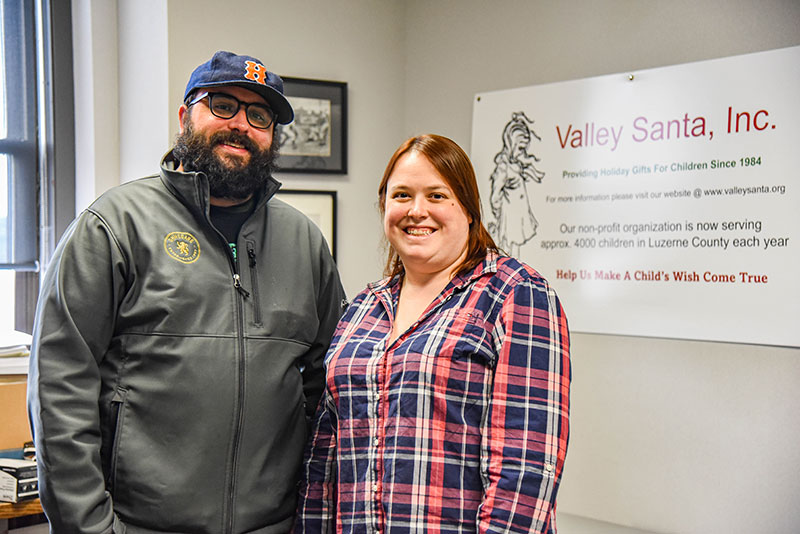 For Wilkes-Barre’s Borland family, serving those in need is a Christmas tradition.

For over 35 years, Sarah Borland and her brother, Joe have spent a better part of the holiday season reading heartfelt letters, then shopping (a lot), and then wrapping (a lot). This three-step process may seem ordinary to most families this time of year, but for the tireless team behind Valley Santa, it’s part of a much larger mission.

Every year, between November and December, the Borlands reconnect with old friends and eager, new volunteers. They meet. They plan. And they dedicate almost every waking hour over the ensuing weeks to making Christmas just a little more special for local kids in need.

Sarah and Joe grew up in a household dedicated to service. Wherever they went, whatever they did, they found themselves anchored by the central tenet — do as much good as you can, for as many as you can, for as long as you can. They often tagged along with their parents, Kim and Ruth Borland, to help prepare meals for the homeless. At times, the Borlands even encouraged their young children to engage in conversation with those waiting – to listen with compassion and to speak honestly. For young Joe, those moments had left their mark. He realized then how even a small effort toward kindness could lift someone up in more ways than you would ever know.

In fact, it was a similar, small act of kindness, seen through the eyes of a child, that ignited the spark that was to become Valley Santa. 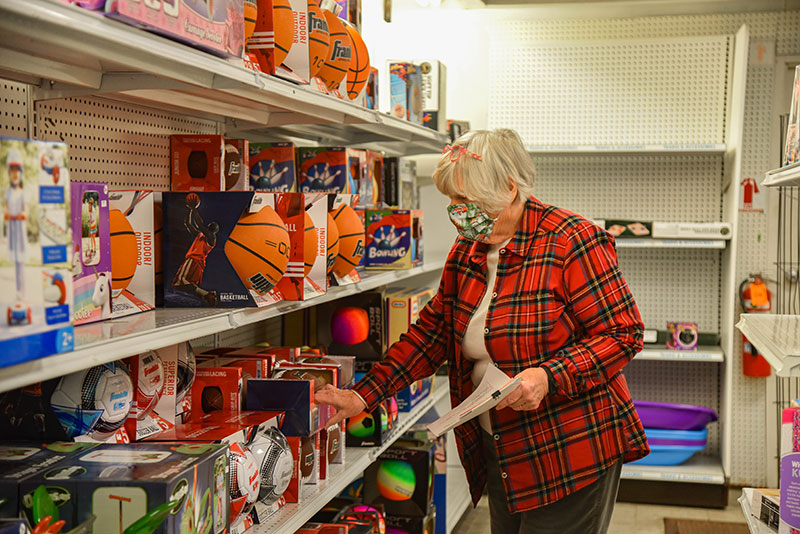 It all started with a simple, Styrofoam airplane.

In 1983, Kim Borland played Santa Claus at the Domestic Violence Service Center. As he gave out presents, a little boy, no more than 7 or 8 years old, nervously approached. Kim handed him an inexpensive Styrofoam airplane. The child broke down in tears. He never received a present before and now he had a toy. That simple gift meant the world to the little boy.

Kim, his wife Ruth, and several other volunteers knew, in that moment, they had witnessed something special. They mobilized, pooled their resources and decided to act. In 1984, they founded Valley Santa, Inc. Through the nonprofit organization, the Borlands, their children and countless volunteers would provide presents to children in Luzerne County, who, for various reasons, often might not receive them.

During the first year, they served about 300 children. They now provide presents to approximately 3,000 to 4,000 children annually. With families struggling even more this year due to the pandemic, they expect 2020 to be their largest demand year ever. 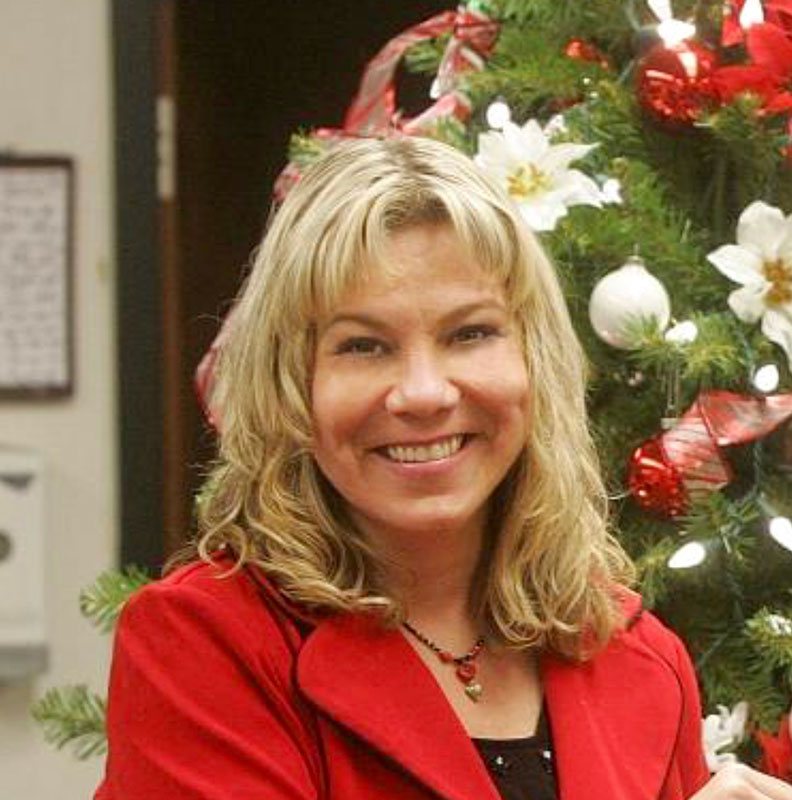 Valley Santa is built on community partnerships. Major sponsors include the City of Wilkes-Barre, Boscov’s and M&T Bank. The Citizens’ Voice and the Standard-Speaker, two popular NEPA Newspapers, devote resources and premium print space to the effort. Both newspapers regularly publish letters sent to Valley Santa from struggling families.

Denise Allabaugh, a ’92 graduate of King’s College and seasoned reporter at The Citizens Voice, enjoys helping in any way she can. Allabaugh pores through each letter, editing personal information and changing names. Publishing the letters lends a dose of reality. It offers the community at large a glimpse into some of the real hardships faced by their neighbors during the holidays.

Allabaugh currently also serves on Valley Santa’s Board of Directors and she has been involved for many years. For her, understanding just how differently local families struggle is the most sobering aspect of her work with the nonprofit. They see it all from lost jobs, and major health problems to single moms unable to afford even the basics of childcare. And now, the pandemic has only exacerbated these challenges.

Other community partners include Allan Industries, HelpLine, and social service agencies in Luzerne County, who also make referrals to the program.

I hope readers understand that none of the circumstances are the children’s fault and its primary goal is to ensure every child in need has a Christmas gift.

Denise Allabaugh, Valley Santa Board Member and Reporter at The Citizens Voice 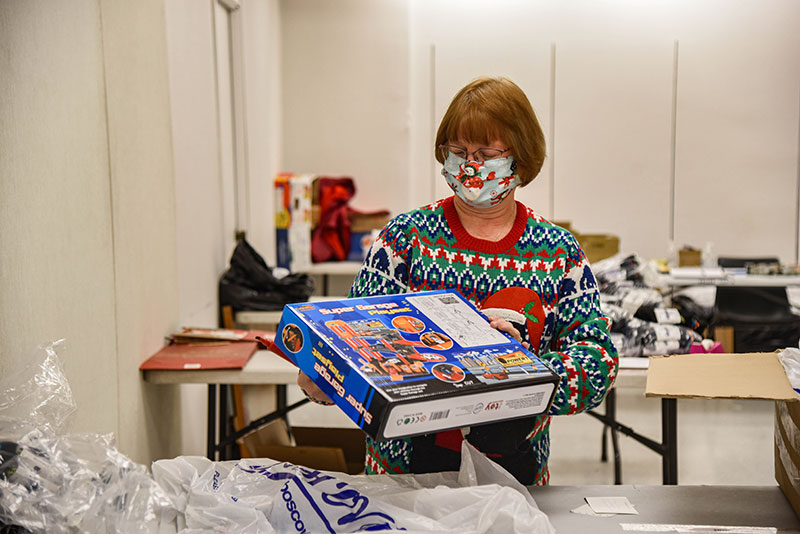 According to Sarah Borland, 60% of the people who make requests are either requesting help for the first time, or didn’t request the year before. Understandably, a majority of those asking for assistance use the program as a crutch during difficult times.

One thing, however, that never ceases to amaze Sarah is the natural, reciprocal nature of many families. For instance, the organization receives a lot of financial support from families paying it forward. Many send in checks with little notes that say they’ve benefitted from Valley Santa in the past and now they want to help others.

“We have a lot of volunteers who were either children that used it or they are parents that had to use it for a year or two and now they volunteer to help other kids get it,” offers Joe. Ultimately, the program serves those who need it. It doesn’t matter whether someone lives in constant poverty, or if their car recently broke down. And there is no consideration of religious beliefs or holiday traditions. “It’s about children knowing they were remembered and thought of. And that they deserve to have a childhood,” Sarah says. “We want children to feel loved.” 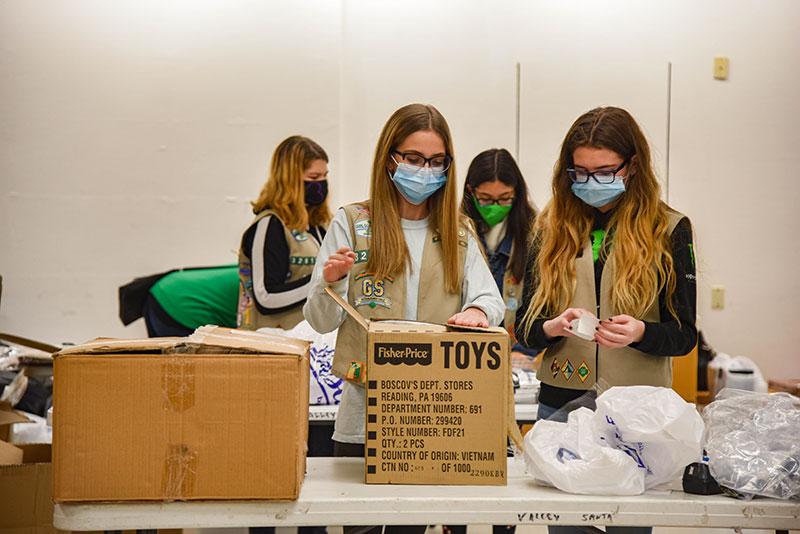 Adapting to the pandemic

In addition to preparing for higher demands in 2020, the program has had to adjust its process. Many of their reliable, elderly volunteers found themselves unable to participate due to heightened health concerns. Instead, they had to rely on a core team of veteran program volunteers.

At Boscov’s, where all the shopping takes place, teams work in small numbers with more flexible hours, masks, and proper social distancing. Wrapping also has limited volunteers and presents are packaged with gift bags to promote less contact.

Community partners pivoted too. Allan Industries normally runs an aluminum can collection to benefit the program. This year, they simply settled on making a generous, flat donation.

We try to make it as easy as possible for people to ask us for help. We know dignity is also a big part of people’s lives, and that they want to provide for their children. We’re just a way to help them do that. When you request presents from Valley Santa, you are providing for your children just as if you went to buy them yourself. I don’t feel there’s any shame in it. I think it’s amazing when parents are willing to do it. 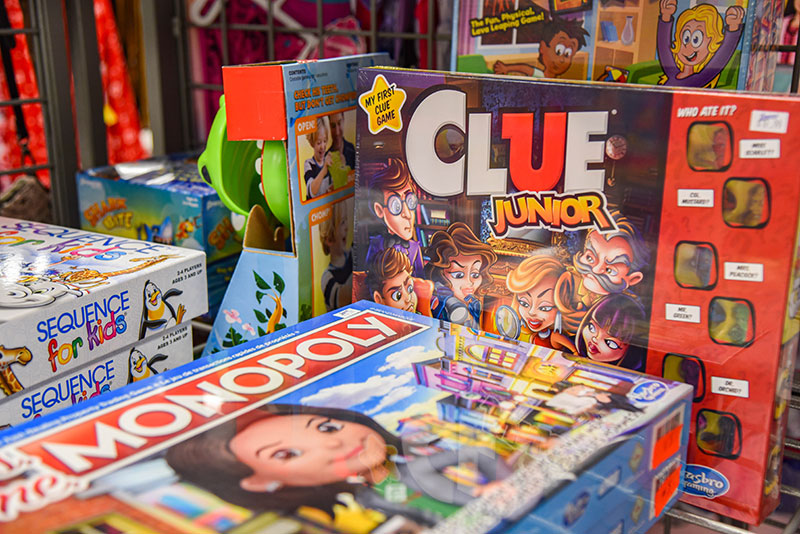 About seven years ago, Valley Santa began adding a book to each child’s assortment of gifts. This small gesture, spearheaded by Sarah, was partly inspired by Dolly Parton’s Imagination Library. She recalls a letter from a young girl then staying at the Domestic Violence Service Center. She only asked for books. Sarah couldn’t help but see a little bit of her bookish self in that letter. From there, her mission to ensure that little girl got her books sort of exploded. And today, each bag of presents that goes out the door also includes a book.

While thousands of books are ordered with the help of donations, local volunteers have stepped up in many ways. Debra Pellegrino, a professor at the University of Scranton, teaches an entry-level class on community service for freshman. Her students donate books, including their childhood favorites. Bob Silvi, a volunteer on the Board, helped to secure book donations from his previous employer, Penguin Publishing. In the past, Barnes and Noble contributed with a customer-fueled, pay-it-forward program. 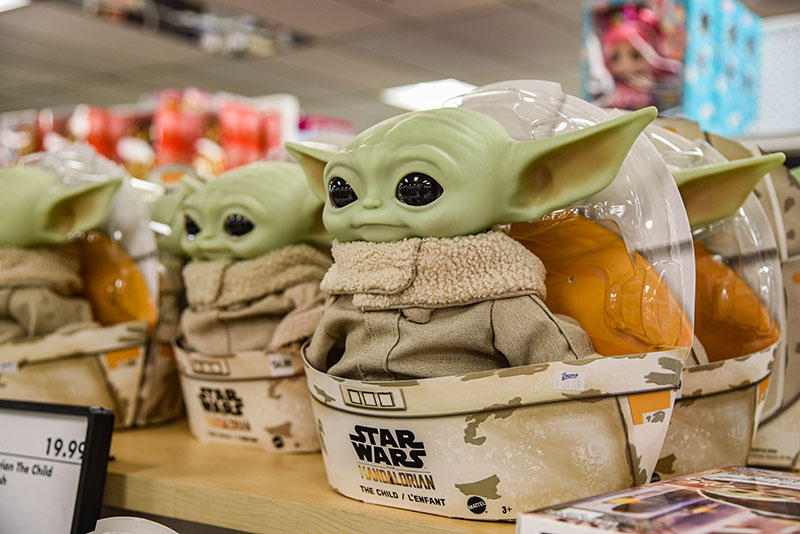 Sarah also makes a conscious effort to order books with a diversity of authors and characters. She reminds volunteers that books are not gendered. A little girl might love the book on sharks. A young boy may want to read about fashion.

In all, they strive to get children what they want — a principle they stand by when filling requests for toys. If a boy wants a doll, he gets a doll. Sarah and Joe also try to stay up on trends. They keep an eye out for popular movies and television shows. And they try to ensure children have an opportunity to receive the same “hot ticket” items like their peers. For example, they’re already expecting to give out a lot of Baby Yodas this year. 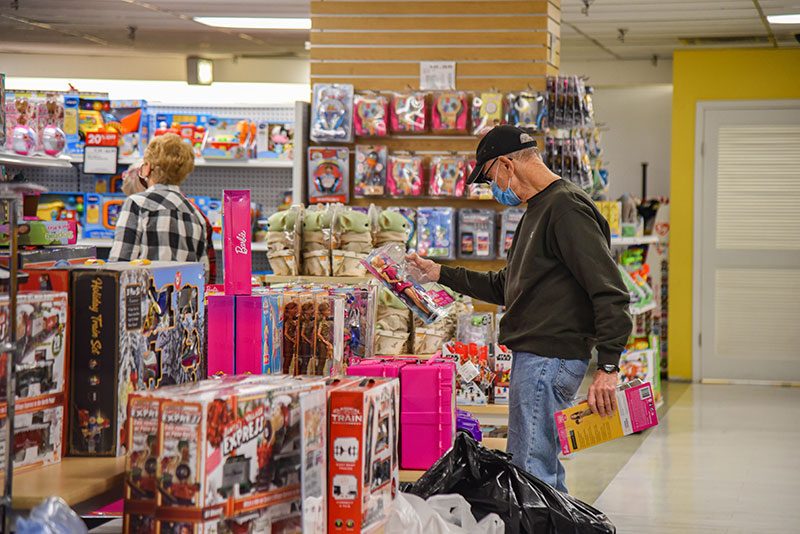 From the very beginning, Boscov’s in Wilkes-Barre has remained an invaluable partner to Valley Santa. The iconic department store offers resources for shopping and wrapping operations. In the first couple of years, they even extended a risky line of credit. For the generous Boscov’s team, however, that risk was well worth it. They understood the program’s importance to the community.

According to Joe, efforts like that are the reason Boscov’s remains an anchor in the Downtown business community. Their continued support of Valley Santa shows just how much they care about the city and its people. They do whatever they can to help. That might include keeping specific toys in stock, or transforming their fourth floor into Valley Santa’s gift-wrapping workshop.

The people are always so happy and so appreciative. It really is just a nice moment for you personally. It’s one of those things where you think you’re doing something to help somebody else but it helps you. 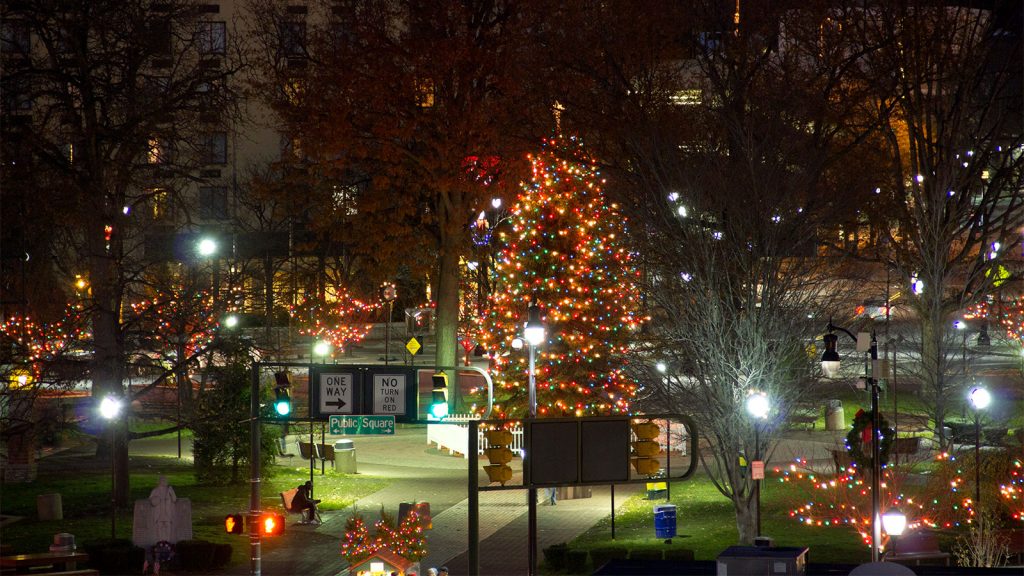 The valley with a heart.

While Sarah and Joe both left NEPA for college and law school, they credit their experiences with the region’s deep sense of family for ultimately bringing them back. It was Valley Santa, they claim, that reinforced, for them, the true character of Northeastern Pennsylvania.

“Maybe it’s safe to say that without seeing how much this community cares about each other, maybe I wouldn’t have moved home,” Joe says. For Sarah, that type of community spirit is unique to our region. She often enjoys welcoming friends from out of town, or overseas and letting them experience if for themselves.

As for the future of Valley Santa, their parents never set expectations of Sarah and Joe to take the lead. They see it, however, as a matter of tradition. It’s been a part of their family for as long as they can remember. For both, it’s an honor to step in and ensure it remains a cherished, local organization for years to come. 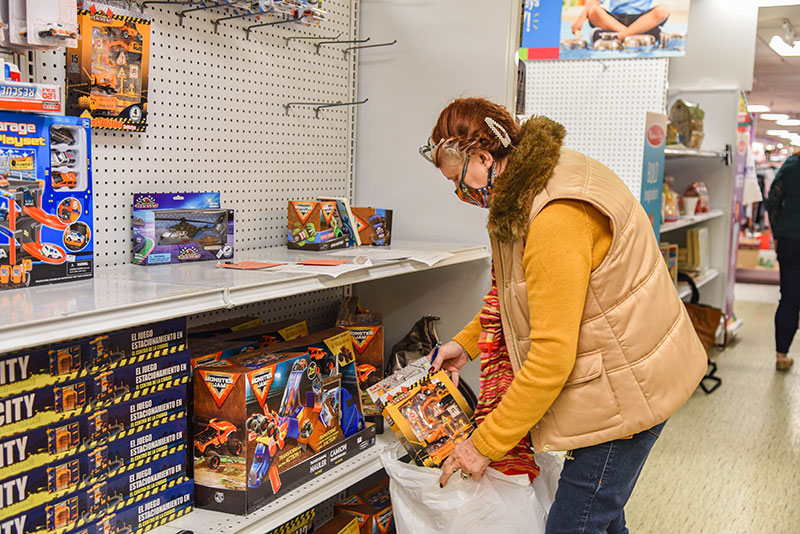 You can help spread the joy of many future Christmas mornings.

Valley Santa relies on donations to purchase gifts for children in need each year. Monetary donations may be mailed to:

Donations may also be dropped off at any M&T Bank Location.

You can also donate via credit card or PayPal here.

In our effort to create Northeastern Pennsylvania’s most comprehensive nonprofit directory, we came across hundreds of amazing organizations. Naturally, we wanted to share their inspiring stories.

In this series, we aim to highlight the hard-working organizations, the good people, the selfless volunteers, the helpers, the healers, the listeners, the comforters and all the great work they do. We hope that, through these stories, you too will be inspired to lend your time, your hands and your hearts. Follow along as we take a look beyond the mission statement. 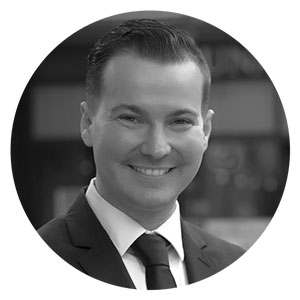 Anthony grew up with his six siblings in NEPA. He is passionate about local nonprofits and community organizations. He especially enjoys grabbing a coffee downtown, following professional tennis, binging his favorite TV shows, and watching pro wrestling.

View All Articles by Anthony Melf 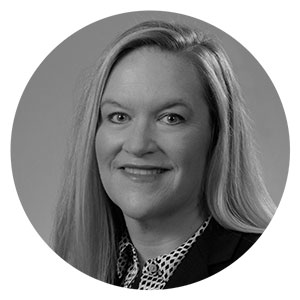 IGNITE Program 2 – Inside the Incubators