A Retro, Nostalgia-Inducing Landmark in Lehighton

This past year was a rough one for the film and entertainment industry. Many movies planned for 2020 were pushed back, while others were dumped onto streaming platforms or scrapped entirely. Movie theaters, with their reliance on packed auditoriums and Hollywood’s latest releases, took an especially hard hit. So, when the marquee lights dimmed and the popcorn stopped popping, where could film buffs turn? Luckily, an alternative to commercial theaters exists right in our backyard. At The Mahoning Drive-In, what appears to be a vacant Lehighton lot by day transforms into a movie lover’s dream by night.

After being built in 1947, the drive-in officially opened to the public in 1948. Not much has changed since opening day, besides an addition to the original screen and the models of cars that line the rows. From the original Simplex E7 35mm projectors to the classic films shown every weekend, the Mahoning Drive-In memorializes days gone by in a world that relies on moving forward.

In the concession stand, shelves of VHS tapes and DVDs (yes, DVDs are now considered retro media) line the walls. Boxes of vinyl records sit along the counter. Even a vintage cash register holds payments for popcorn and candy behind the counter. But the true star of the show exists just around the corner.

In the same building, guests have the opportunity to check out the original, untouched projection booth. Inside, the Mahoning’s dual, 75-year-old, 35-millimeter projectors create an authenticity that simply cannot be replicated digitally. The man behind the curtain, projectionist Jeff Mattox, has been associated with the drive-in for 20 years. He knows better than anyone that preservation matters. “We want future generations to have the full film experience,” he said. For Jeff, it’s all about connecting people through an appreciation for classic film. In the end, fostering that appreciation is worth more than adhering to the expectations of “big-time” production companies. 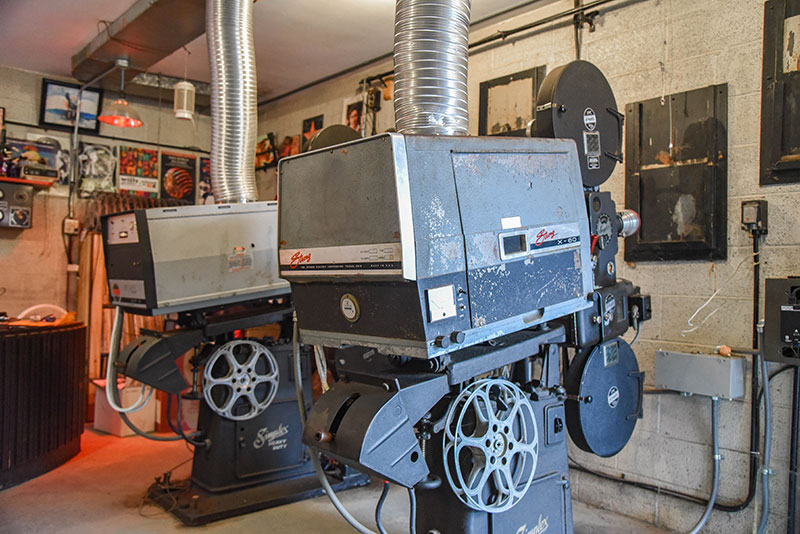 As darkness descends and cars file in, it’s easy to see how the Mahoning has become a pop culture landmark. Rows quickly fill up with guests — some with elaborate set-ups and costumes. Newcomers mingle with regulars and true die-hards. Many drop what they’re doing to chat and catch up with passing Mahoning employees. There’s a palpable camaraderie in the air — plenty of first names and nicknames thrown about.

“It’s as much the people as it is the films,” said General Manager, Mark Nelson. “We’ve had people come all the way from Texas and Florida,” he continued, explaining how the Mahoning has become a nationwide sensation. Mark himself was once one of these commuters. At one point, he was traveling several hours from New Hampshire to the drive-in every weekend. It only made sense for him to join the team. Many members of the Mahoning staff share stories similar to Mark’s. They truly are just fans looking to share their common love — not only for film, but for an experience that, in so many places, has been somewhat forgotten. 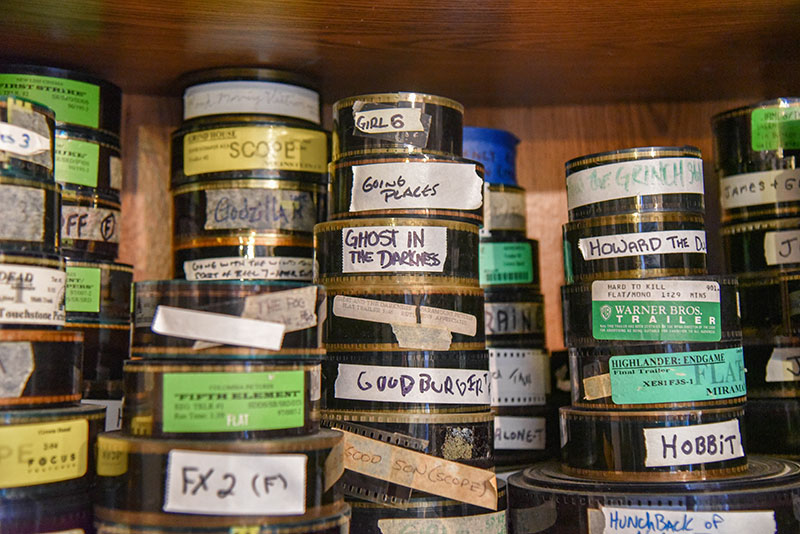 The theater specializes in “retro-classic” films. This includes nostalgic family-favorites, such as The Wizard of Oz and Willy Wonka & The Chocolate Factory. They also celebrate cult classics, like Monty Python and the Holy Grail and The Blob. And it just wouldn’t be a true drive-in experience without Dracula, werewolves and zombies. Both classic and “not-so-classic” horror titles account for some of the Mahoning’s biggest weekends. If you truly want to see this place in all its glory, stop by during Halloween.

From meet and greets with celebrity guests to photoshoots with hand-built backdrops and props, the Mahoning values fandom just as much as the movies. “We love to break the fourth wall,” explained J.T. Mills as we watched guests attempt to defeat his homemade Blob. Letting loose is a Mahoning requirement. 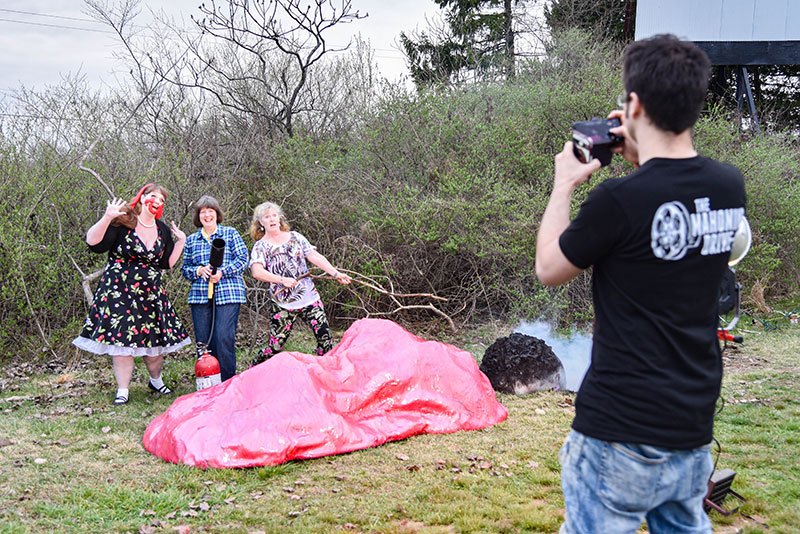 Pure Fun Worth the Price of Admission

As we stood outside the concession stand, taking in the showtime rush, Virgil Cardamone, the Mahoning’s film curator and publicist, approached us with a little guest in tow. “This is little Virgil,” he introduced us. For as young as he is, little Virgil was obviously excited to be among the hustle and bustle of a night at the Mahoning. Looking at his son, Virgil added, “I would’ve loved to grow up at a drive-in.” Thankfully, the Mahoning Drive-In gives the next generation of film buffs the chance to do just that.

The Mahoning Drive-In, located at 635 Seneca Road in Lehighton, is open from April to the first week of November. The 2021 season already has plenty of events on the schedule. From “The Wild World of David Lynch” (May 14-16) to “HanksGiving” (June 4-5), there is sure to be a niche for everyone. You can check out the Mahoning’s website, Facebook, Instagram, and Twitter for upcoming films and events. You can even watch At the Drive-In, a 2017 documentary about the Mahoning, or listen to Mahoning Drive-In Radio for more history and staff interviews.

Check out May's Events at The Mahoning Drive-In

From classic Disney to sweet, Kevin Bacon dance moves to the wild world of professional wrestling, you’ll find it all at The Mahoning Drive-In this summer. 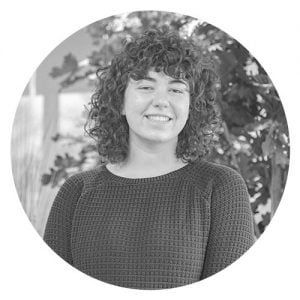 King’s College – Wilkes-Barre, PA / Class of 2022
Ireland Davies is NEPA born and raised. She is currently studying English Literature at King’s College and is expected to graduate in 2022. In her spare time, you can find her writing, watching old movies, or trying out new coffee spots throughout the region. 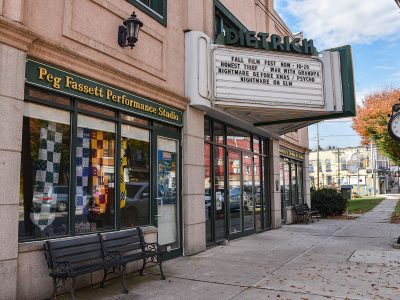 Discover the Arts at the Dietrich Theater 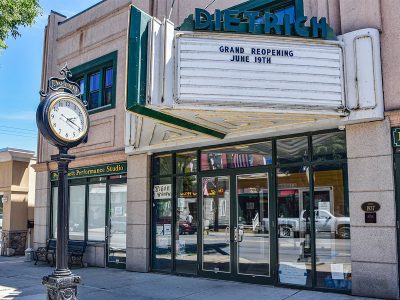 Dietrich Theater to Reopen on June 19 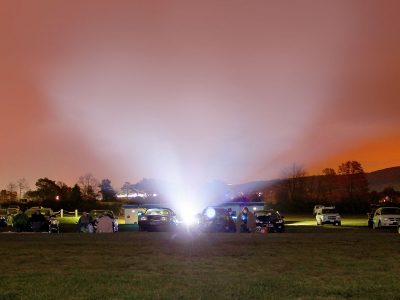