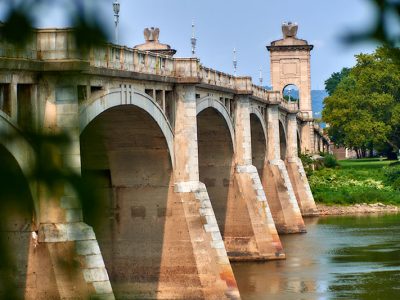 This stunning, 1,400-foot crossway connects Wilkes-Barre and Kingston, running through both sides of East Market Street. The bridge links Wilkes-Barre to Kirby Park, the “west side” communities and the Luzerne County Levee Trail. It’s one of the more popular walking, jogging and sightseeing routes in the county.

Built from 1926-1929, the Market Street Bridge is one of the longest concrete bridges in Pennsylvania. The bridge consists of twelve arches — six closed spandrel arches and six open spandrel arches. Each side of the bridge features a massive pylon, where an eagle statue perches on top. The eagles, which come from Penn Station, weigh 5,500 pounds, making them heavier than a fully-grown rhinoceros. The four statues stand in honor of fallen veterans of the First World War.

The Market Street Bridge was designed by Carrere and Hastings, the same New York City based architecture firm that crafted the New York Public Library. This makes the eagle on either side of the bridge the NEPA equivalent of the iconic lions which guard the entrance to that library.