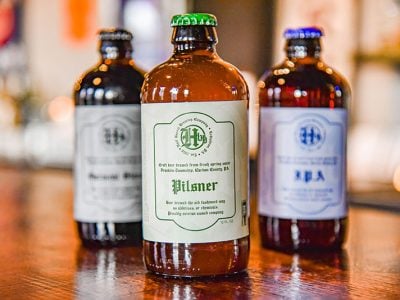 Since the summer of 2019, this veteran-owned craft brewery in Lehighton has been cranking out one noteworthy beer after another. Half Barrel Brewing Company claims a densely wooded stretch of the southern Pocono Mountains. And, in its short tenure, the little brewery has made a name for itself among local, craft beer fans.

The brewery keeps it straightforward and simple. One look at their labeling assures you that, here, it’s only about the beer. Look out for their perfectly crisp Pilsner, or delightfully dark and creamy Oatmeal Stout. The holidays bring out their delicately aromatic Christmas Ale. And, in the warmer months, you’ll find yourself dreaming of their light and easy Summer Splash cream ale.

The brewery operates largely on a local keg and bottle distribution model. Their tasty beers are available at many Carbon County establishments. Look for Half Barrel’s signature steinie bottles at the historic Hofford Mill and Radical Wine Company to name a few. You can also find them at several local beer stores and bottle shops in the Lehighton/Jim Thorpe area.

Half Barrel also operates a tap room at Insurrection Distillery less than 5 miles from the brewery. Throughout the year, they team up with local restaurants and food trucks for events and tastings.

Keep your eye on Half Barrel Brewing Company for updates on new beer releases and the rotating selection in the tap room.

Music at the Lounge with TJ Santiago