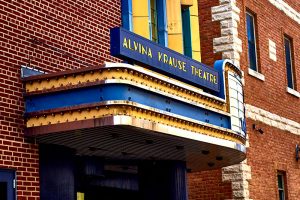 This theatre was opened by a group of young artists in 1980 and named in honor of its beloved drama teacher, Alvina Krause. Known fondly as the “maker of stars”, Krause’s students included The Brady Bunch’s Robert Reed, film director Garry Marshall, All My Children and One Life to Live creator Agnes Nixon, and Charlton Heston, just to name a few.

Formerly the Columbia Theatre, this 625-seat movie space in Bloomsburg is now home to the Bloomsburg Theatre Ensemble. It has retained most of its original marquee, adding to the experience of theatre-goers with its distinctive look and feel.

Turning 15 on the Road to Freedom