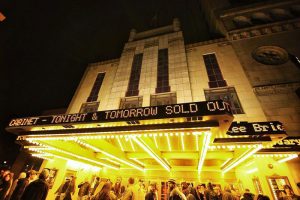 This year, the Halloween Film series, Splatterday IV, opens with Goosebumps [PG], based on the children’s horror book series by R.L. Stine, a teenager (Dylan Minnette) tries to save his town with the help of R.L. Stine (Jack Black) after monsters, demons and creatures from Goosebumps begin to escape from their books and wreak havoc in the real world. The costume parade will be in the theater at 5:00pm.

This year, the Kirby Center will also be showing A Nightmare on Elm Street [R]. The 1984 Wes Craven slasher film features four teenagers living on one street who are invaded and killed in their dreams, starring Johnny Depp in his film debut.

For the sixth year in a row, the Halloween Film Series features a midnight showing of The Rocky Horror Picture Show [R]. The film stars Tim Curry, Susan Sarandon, Richard O’Brien, and Barry Bostwick. Come dance the Time Warp at the Kirby Center! Visit the Kirby website for a list of approved props.

The films, times, and prices are as follows: