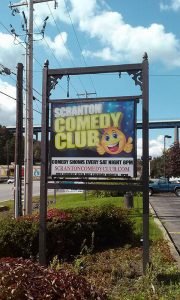 Joe Conte – Appeared on Comedy Central, Host of the Conte and Kenny Show podcast, appeared in the movie “Gorillas In The Mist”, Performs regularly in NYC

Tickets are $40 and includes the Comedy Show and Dinner Buffet!

Under the Marquee Karaoke Night