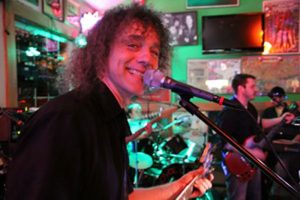 Downtown Jimmy Brown takes the stage for the rhythm and brews series.

“Downtown” Jimmy Brown is a professional musical entertainer based out of Stroudsburg, PA, as well as Senior Music Editor of Guitar World magazine in New York City. He has a highly appealing solo act that nearly qualifies as a “one-man-band”—guitar, vocal and live percussion performed with both feet—and plays regularly all around the greater Stroudsburg area. Also, has a duo act and The Jimmy Brown Band.

Jimmy has amassed an impressively diverse repertoire of cover songs that he puts his own creative stamp on and often uses as vehicles for spontaneous improvisation, featuring mostly classic rock and pop singer-songwriter favorites (lots of Beatles, Eagles, Led Zeppelin, the Allman Bros. Band, Pink Floyd, the Who, James Taylor, Jim Croce, Paul Simon, Tom Petty, Elvis Costello, Steely Dan, and many others), plus a good helping of the Eighties and Nineties artists, such as the Police, U2, the Foo Fighters, and the Red Hot Chili Peppers, plus some choice contemporary artists like Philip Philips, Mumford & Sons, John Mayer, Jack Johnson, Jason Mraz, The Lumineers, Avicci, and Pharrell Williams, as well as classic and contemporary country (everything from Johnny Cash and Willie Nelson to Blake Shelton and Luke Bryan), blues, reggae, R&B, and even a little jazz, classical and European ethnic folk!

Jimmy utilizes both acoustic and electric guitar sounds, has a pleasing, pitch-accurate voice that can be both powerful and soothing, a polished sound and a neat visual setup and presentation. He’s an experienced performer who knows how to interact with and please an audience by satisfying a surprising range of song requests and playing just the right music for the “mood of the room,” which can change from night to night or even from hour to hour in the same venue! He can be the life of the party and get people dancing to his driving electric-bass-drum-and-tambourine grooves while singing and playing his ass off, or he can provide pleasing background music if that’s what the situation calls for. He also prides himself as being an experienced audio technician, or “sound man,” who is able to quickly “diagnose” and calculate the acoustics of a room and dial in a pleasing sound and appropriate volume level in any new environment without irritating or driving away an audience by being too overbearing with the volume or sounding too shrill, boomy or piercing, or by playing anything age-inappropriate. He’s very aware of and sensitive to his surroundings and people’s reactions to his performance appreciate how important every person in the audience is and bends over backward, musically speaking, to please everyone!

Under the Marquee Karaoke Night