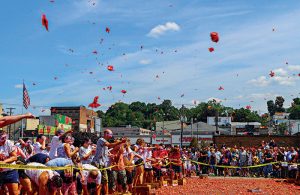 The 36th Pittston Tomato Festival will be held in downtown Pittston on Thursday, August 15 through Sunday, August 18.

Over 50,000 people will attend the award-winning four-day event.

Delicious food, a variety of live entertainment, tomato fights, a parade, a 5K run and walk, games, artists, and of course home-grown Pittston tomatoes keep bringing an enthusiastic crowd to the festival year after year.

The festival’s opening ceremony will be held on Thursday, August 15 at 6 p.m. followed by live entertainment.

The parade will begin on Saturday at 10:30 a.m. The event will be televised live on Fox 56.  The route will start at the A-Plus Mini Mart,continue through Main Street and down Kennedy Boulevard, and end at the Cooper’s Co-op building.

A Tomato Contest will be held at 7 p.m. on Saturday in the Tomato Festival Committee Stand on the festival grounds.  Bring your largest, smallest, ugliest, and most perfect tomato to the stand by 6 p.m. for judging.

On Sunday, the Little Miss & Little Mr. Tomato Contest begins at 10:45 a.m. followed by live entertainment until the festival closes at 9 p.m.

The Pittston Tomato Festival has been featured in Parade Magazine, The Washington Post, and Pennsylvania Magazine and was preserved as part of the Library of Congress Local Legacies Project in Washington D.C.

For more information, call (570) 655-1424 or visit the website at www.pittstontomatofestival.com

All Ages Mini Golf and Lunch in the Pittston Library