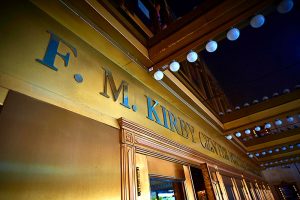 An incredible five-act concert of countless memorable hits comes to the FM Kirby Center. The band started with four teenagers singing in Sandy Yaguda’s Brooklyn basement, and they are still going strong today.  In 1960, they were signed by the dynamic producer/songwriting team of Jerry Leiber and Mike Stoller to United Artists, and, starting in 1962, Jay and the Americans charted twelve top 10 records.  In 1962, “She Cried” went to #5 on the charts.  Jay Traynor, the first “Jay,” was the lead singer.  He was replaced by Jay Black, (Jay #2), who was lead singer on the rest of their hits.  In 1963, “Only in America” was a hit.  In 1964, “Come a Little Bit Closer” went to #2, “Let’s Lock the Door (and Throw away the Key)” was top 20, and JATA were part of The Beatles first American tour and played Carnegie Hall on the Rolling Stones tour.

From 1965-1970, their hits included the incomparable “Cara Mia” (#4), “This Magic Moment” (#9), “Some Enchanted Evening” and “Walkin in the Rain.”  In 1971, Walter Becker and Donald Fagen were the bass and keyboard players in the band before they went on to form Steely Dan.  In 1973, the group disbanded, although Jay Black continued to tour and sing their hits.  Sandy directed “Beatlemania” on Broadway and became A+R Director of ABC Dunhill Records.  Marty Kupersmith wrote “Bad Reputation’ with Joan Jett.

In 2006, Jay Black declared bankruptcy, and the court sold the rights to the “Jay and the Americans” name to founding member Sandy Yaguda.  The other bidder was Jay Reincke, a Chicago-based singer who had been singing their tunes in his band for decades.  Sandy and Howie flew to Chicago to see Jay Reincke perform ad were blown away by his vocal prowess, resulting in “Jay #3” joining Jay and the Americans.  Original members Sandy Yaguda, Howie Kirchenbaum and Marty Kupersmith, plus Jay Reincke, continue to recreate the authentic, unforgettable sound of their great hits to the delight of their fans.  You’ll see why they were inducted into the Vocal Group Hall of Fame in 2002.

Coheadlining the show are New Jersey’s fabulous Duprees.  Known throughout the world for their romantic interpretations of some of the most beautiful love songs ever written, The Duprees possess a smooth yet powerful vocal quality and heavenly harmonies, evidenced in their many hits, including the 1962 blockbuster smash “You Belong to Me.”  Other hits include “My Own True Love,” “Why Don’t You Believe Me,” “Have You Heard” and “Exodus.”  Their unique arrangements include doo wop harmonies combined with big band orchestrations, and their sound brings back memories of Glenn Miller, Frank Sinatra and Nat King Cole.  Although their romantic harmonies are second to none, The Duprees are also known for their high energy, dynamic stage show that energizes the audience.  The Duprees, like Jay and the Americans, were inducted into the Vocal Group Hall of Fame in 2002.

Brian Hyland will perform in Wilkes Barre for the first time.  As a child (born in Queens, NY), he studied guitar and clarinet and sang in the church choir.  At age 14, he co-founded the harmony group “The Delfis.”  Brian signed with Kapp Records and collaborated with the songwriting duo of Pockriss and Vance.  In 1960, at age 16, Brian had his first and biggest hit, “Itsy Bitsy Teenie Weenie Yellow Polkadot Bikini.”  It was a #1 Billboard smash hit and went to #8 in the United Kingdom.  He signed with ABC-Paramount Records and began to work with songwriters/producers Geld and Udell.  “Let Me Belong to You” (top 20) and “I’ll Never Stop wanting You” followed.  In 1962, “Sealed with a Kiss” reached #3 on the Billboard and UK charts and was his second gold record.  Hyland was a teen idol and toured with Dick Clark’s Caravan of Stars.  “Ginny Come Lately” reached #21 on the US charts and #5 in the UK, and “Warmed Over Kisses (Left Over Love)” reached #25.  In the mid 1960s during the British invasion, Brian’s music incorporated country and folk elements.  “The Joker Went Wild” was a top 20 hit.  In 1970, “Gypsy Woman” peaked at #3 an became his third gold record.  Brian Hyland continues to tour today to popular acclaim.  His son Bodi is his drummer and musical director.

Gary U.S. Bonds was born in Jacksonville, Florida and grew up in Norfolk, Virginia where he sang in the church choir and formed his first band.  Bonds had major hit songs in the early 1960s, including #1 smash “Quarter to Three.”  Other hits include “New Orleans” (peaked at #6 on the charts), “School is Out” (#5 hit), “Dear Lady Twist “ (9) and “Twist, Twist, Senora” (#9).  While headlining on a European tour in 1963, the Beatles were his opening act.  In the 1980s, Gary’s collaboration with Bruce Springsteen, Steven Van Zandt ad the E Street Band resulted in “This Little Girl, which reached #11 on the pop 100 charts and #5 on the rock charts.  Follow up song “Out of Work” reached #21.  Bonds also co-wrote “She’s All I Got,” recorded by Johnny Paycheck and nominated for Country Music Song of the Year in 1972.  Gary continues to thrill audiences worldwide with his up-temp, saxophone infused music.

Opening the show are the Fireflies, a doo wop group from Long Island.  Their biggest hit was “You Were Mine” which spent 16 weeks on the Billboard top 100 chart in 1959.  “I Can’t Say Goodbye” was their second charted hit.  The Fireflies were the first all-white vocal harmonizing group to perform at the world-famous Apollo Theatre.  They are a perfect opening act for the show.

Five great acts, one great night of doo wop hits and legends that will transport the audience back in time to the wonderful musical era of the late 1950s and 1960s.  Tickets previously purchased before the date was rescheduled will be honored on September 19 (same row and seat).  Tickets can also be purchased at the Kirby Center Box Office, by phone at (570) 826-1100 or on the web at www.kirbycenter.org  For more information, please contact Joe Nardone at (570) 829-3603.  For interviews, please contact Jim Anderson at (518) 526-8145.

Hosted By
F.M. Kirby Center for the Performing Arts

Bright Side: A Virtual Variety Show