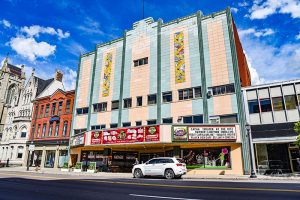 The Northeast Pennsylvania Film Festival, presented by the Waverly Community House and supported by the F. Lammot Belin Arts Foundation, is scheduled for April 17 -April 18, 2021 at The Ritz Theater in downtown Scranton, Pa.

Dedicated to promoting emerging and independent filmmakers the festival accepts films from around the world. The two day festival correspondingly promotes cultural awareness and appreciation of film as an art form by exposing audiences to unique and original cinema.

Now in its fourth year, the Festival’s growing reputation is built on a commitment to offering the region access to new and independently produced films. The 2020 NEPA Film Festival was deferred until this year due to the pandemic. 2019 Highlights included presentation of the F. Lammot Belin Vision Award to Producer/Writer/Filmmaker Lisa Marie Stetler, The NEPA Festival Lifetime Achievement Award to Producer/Director Robert May and an energetic discussion with author Charles Brandt, whose book “I Heard You Paint Houses” has been made into the blockbuster critically acclaimed movie, “The Irishman” under the direction of Martin Scorcese. Tickets go on sale March 16, 2021.

Shrine on the Vine at Irem