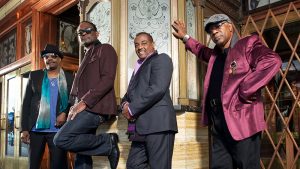 Two-time Grammy Award-winning and 31 gold and platinum album selling band, Kool & the Gang has been performing longer than any other R&B group. Kool & the Gang shot to fame with iconic songs like “Celebration,” “Cherish,” “Jungle Boogie,” “Summer Madness” and “Open Sesame.” Their 1970 sophomore album, Live at the Sex Machine, reached #6 on the Billboard’s R&B chart, driven by hit singles “Funky Man,” “Who’s Gonna Take the Weight” and “I Want to Take You Higher.” Nine years later, the group released Ladies Night, which became their first platinum album.

Kool & the Gang’s unique sound of jazz, funk, and horn arrangements has made them one of the most sampled groups in the industry. Their tracks can be heard in the works of Jay-Z, Madonna and the Beastie Boys. Movie soundtracks for Rocky, Saturday Night Fever, Pulp Fiction and Wreck-It-Ralph also feature hits by the group.

Dynamic dance moves and smooth yet gutsy vocals define Kool & the Gang’s opening act, Morris Day and the Time. Morris Day was a founding member of Prince’s band, The Time, which formed in 1981. The group released tunes such as “I Don’t Wanna Leave You,” “Cool” and “Jungle Love.” Day performed with the group for three years before launching his solo career. Day found success in his sophomore album, Daydreaming, with the chart-topping R&B hit “Fishnet.” In 1995, Day returned to The Time and has been performing their funk, soul, and rock n’ roll tunes ever since.