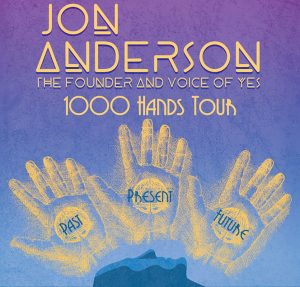 Jon Anderson is undoubtedly one of the most recognizable voices in progressive rock as the lead vocalist and creative force behind Yes. Anderson was the author and a major creative influence behind the ground-breaking album ‘Fragile’ as well as the series of epic, complex pieces such as “Awaken”, “Gates of Delirium” and especially “Close to the Edge” which were central to the band’s success.

Additionally, Anderson co-authored the group’s biggest hits, including “I’ve Seen All Good People”, “Roundabout”, and “Owner Of A Lonely Heart”. In addition, Anderson had great success with a series of albums he did with Vangelis, and most recently released the critically-acclaimed solo album entitled ‘Survival and Other Stories’.

Anderson was a major creative force and band leader (describing himself as the ‘team captain’ and ‘catalyst’; nicknamed by his band mates “Napoleon” for his diminutive stature and leadership of the band) and is recognized as the main instigator of the series of epics produced by Yes at the time.

Yes released 11 critically acclaimed albums (including one live album ‘Yessongs’ and one early compilation ‘Yesterdays’) between 1969 and 1979, including such classic titles as ‘Fragile’ (which contained the band’s first hit “Roundabout”), ‘Close To The Edge’, ‘Tales From The Topographic Oceans’, ‘Relayer’ and ‘Going For The One’.

In 1989, Anderson and other former Yes members formed the group Anderson, Bruford, Wakeman, Howe (ABWH), augmented by bassist Tony Levin who had played with drummer Bill Bruford in King Crimson.

After the successful first ABWH album, a series of business deals caused ABWH to reunite with the then-current members of Yes (Squire, Rabin, White, Kaye), who had been out of the public eye while searching for a new lead singer. The resulting eight-man band assumed the name Yes, and the album ‘Union’ (1991) was assembled from various pieces of an in-progress second ABWH album as well as recordings that “Yes proper” had been working on, without Anderson.