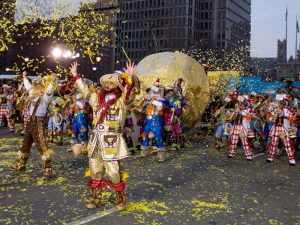 On Sunday, Sept. 27, the Quaker City String Band, longtime Funfest Parade participants, will return to Hazleton for a re-imagined parade beginning at 2 p.m. While the exact route is still being determined, the band will travel through parts of Hazleton on a flatbed truck to allow the community to remain on their porches and in their yards to enjoy the music. The Quaker City String Band marches in the style of a traditional Philadelphia Mummers parade band, which is the parade that the Funfest Parade was modeled after 41 years ago. It also is a connection for the former Hazleton Mummers Association that was started in 1937.

Additionally, the parade caravan will honor the 2020 winner of the Funfest Hometown Heroes contest. A total of 13 heroes were nominated throughout the past several months and all will be honored during the parade. The Hometown Heroes initiative was started last year as a way to honor local military service members, emergency first responders and medical professionals for their service to Greater Hazleton. In addition to the nominees this year, they will also honor World War II veteran Joseph Mehalick, who was honored at last year’s Funfest for his performance.