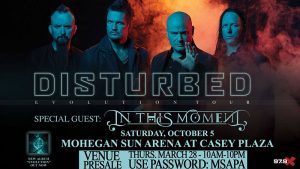 After kicking off the year with a North American tour that saw them playing to more than 200,000 frenzied fans, 2-time Grammy nominees DISTURBED have announced a much-anticipated second leg of arena shows set to begin July 21st including a tour stop at Wilkes-Barre’s Mohegan Sun Arena at Casey Plaza on Saturday, October 5th. Joining Disturbed in Wilkes-Barre will be In This Moment.

Disturbed is touring in support of new album Evolution (Reprise Records), which hit No. 1 on Billboard’s Top Alternative Albums and Top Rock Albums charts, as well as No. 4 on the Billboard 200.

Since launching the tour back in January with a performance on Jimmy Kimmel Live!, Disturbed (vocalist David Draiman, guitarist Dan Donegan, drummer Mike Wengren and bassist John Moyer) has drawn rave reviews for their emotionally powerful live show, with critics pointing out the band’s uplifting messages and the many moving moments that take place during their nightly set, including a tribute to the late Chester Bennington and Pantera’s Vinnie Paul and a call to help those in need who are battling addiction and depression.