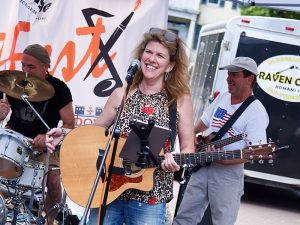 Kerry Kenny is a singer/songwriter and teacher who has sung and performed many genres of music her entire life. Kerry studied Irish Music in Ireland, film scoring at New York University, and computer music composition at the Academy of Music in Krakow, Poland. She has collaborated with Ania Szwajgier on film scores for animated short films; written an entire musical score in Polish for a live stage show (Lans Macabre); and performed for Amnesty International in Limerick, Ireland. Kerry has proudly participated in the Audio Arts Festival and performed computer music compositions at the Goethe Institute, both in Krakow. In addition, Kerry has performed in South Korea, led bands in New York City, and toured Europe.

The Pines Eatery and Spirits