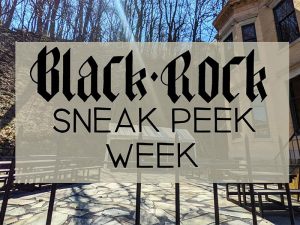 Your ticket guarantees you a spot to check out the Black Rock building for the first time since the old YWCA building was open to the public over a decade ago! You’ll also be able to browse the Springgate Pottsville bottle shop, the Black Rock beer garden, and the Springgate Wine Terrace, all before the Grand opening later in the month.

It also includes a commemorative first edition Black Rock Brewing Company pint glass, (available only at this event) a tour of the building with a Black Rock Team member (great for both beer nerds AND architecture buffs), and access to their “Founder’s Group” on Facebook (for those of you who like your opinions to be known). Members of the Founder’s Group will have the opportunity to provide feedback on their sneak peek experience and communicate directly with the BRBC team to get all of their questions answered. Plus, they’ll get early access to announcements about new releases, brewery updates, and future special events!

The beer menu will be available for purchase, featuring a full lineup of Pottsville-brewed staples including their three flagship Black Rock beers. They’ll have Black Rock Blonde Ale, Lantern Lite, and for the first time ever, Caged Canary IPA – plus offerings from Yuengling and Pilgur Ruh! Be the first to pair your beer with one of their signature stuffed soft pretzels, made fresh in their kitchen.