Stoker’s owner and brewer, Doug Drost credits his win to the good folks who regularly populate his Mauch Chunk St. brewery.  “Our loyal customers have been asking us to enter our beers in competitions for quite some time now, so this award and recognition is for them,” he said. “Without them, there is no Stoker’s Brewery. Without them, there are no awards.”

Stoker’s Brewing Company opened in August of 2018. Drost, a Hazleton native, has been brewing for over 20 years. His unique, European-style brewhouse currently offers a slate of 21 meticulously-crafted beers. The tap list features tried-and-true European classics, like Hefe-Weizen, Belgian ales and Pilsners. You’ll also find a host of IPAs, sours, stouts and porters. And, depending on the season, Drost typically dreams up a handful of tasty twists on old favorites.

Stoker’s “Divine” Belgian Strong Golden Ale is, first and foremost, a traditional Belgian. It’s brewed using Belgian candi sugars and evokes that familiar fruity pear and apple aroma. According to Drost, “It has a golden and effervescent appearance that rises into a mountainous rocky white head.” He continues, “It’s a complex, yet delicate beer with a relatively light body for an ale of its strength (9.5% ABV) with a lingering, dry finish.”

Stop by Stoker’s Brewing Company on Mauch Chunk St. in Tamaqua and taste this blue-ribbon beer for yourself. “Divine” Belgian Strong Golden Ale is currently available on draft. And soon, in 2023, you’ll be able to get it in 750ml bottles.

Find Stoker’s Brewing Company among the 39 local craft breweries on the DiscoverNEPA Brewer’s Loop. And be sure to check out more of the PA Farm Show continuing at the PA Farm Show Complex in Harrisburg through Saturday, January 14, 2023. 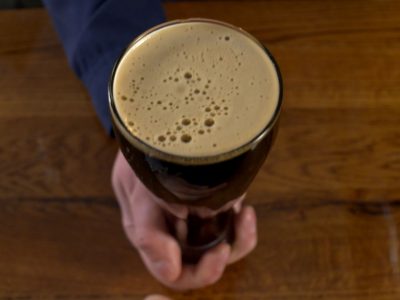 Warm Up With Cozy Winter Beers at NEPA’s Craft Breweries