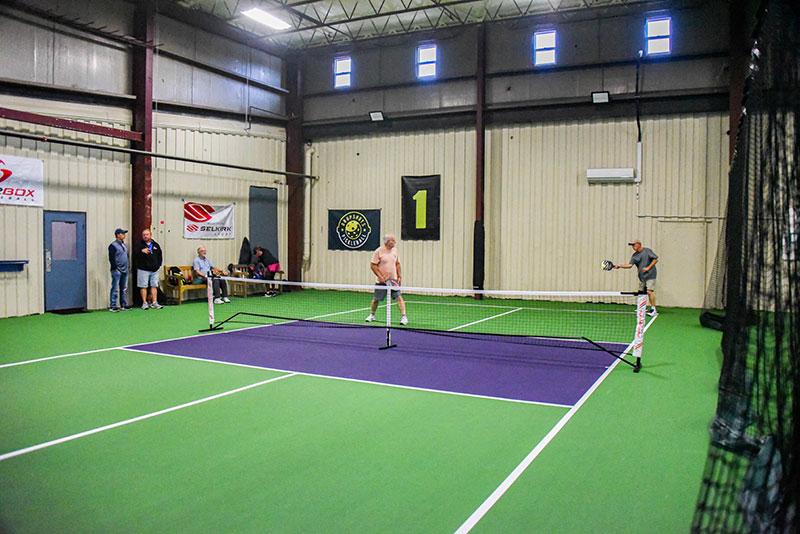 Deep in the Pocono Mountain wilderness, somewhere between Hawley and Honesdale, if you listen closely, you’ll pick up a distinct, rhythmic popping echoing through the woods. As you approach the mountain village of White Mills, famous once for its Dorflinger Glass Company, the sound grows. Only now, it’s accompanied by grunts and encouraging shouts of “Opa!”

Is it some local garage band? Has some gang of local youth gotten their hands on a pack of ladyfingers? 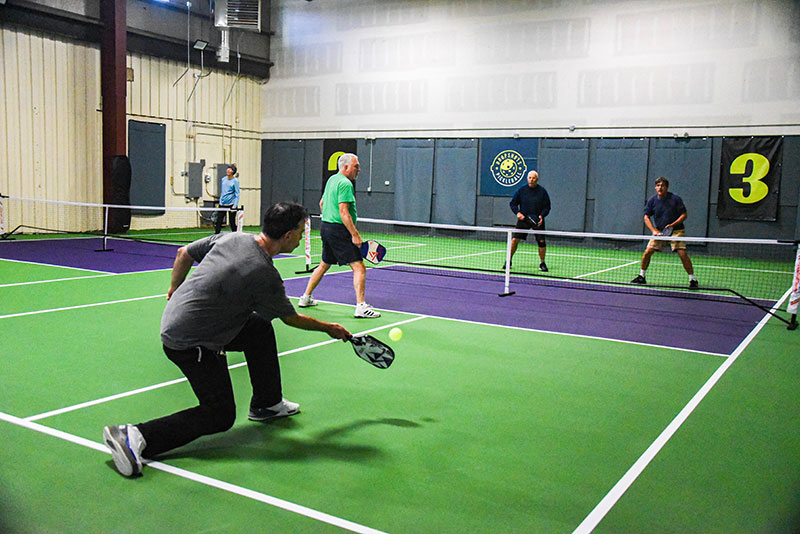 You’re pretending to know what we’re talking about right now, aren’t you? Well, if you don’t keep up on quirky paddle sports, I’ll fill you in. Pickleball, by all accounts, is one of the fastest growing recreational sports in the country. It involves paddles, a plastic ball, a net and, from personal observation, a bit of wild-eyed enthusiasm. I could go on, but maybe we should let an expert explain.

Enter Matt Davis, who along with his wife, Christine, owns Dropshots Pickleball in White Mills. The couple opened their 5,500 square foot, all-things-pickleball facility within The Sports Factory of NEPA at the end of October. And since then, Dropshots’ three regulation courts have been abuzz with squeaking sneakers, furious volleys and “dinks.” Yeah. We still have a lot of questions, too.

We recently popped in for a chat with Matt, Co-Owner and avid uh…Pickler? Pickleballer? Well, you get it. 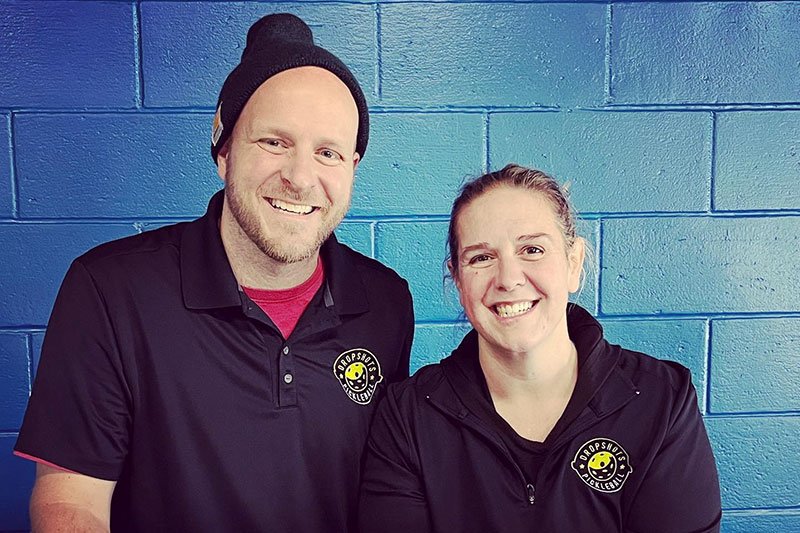 Pickleball is a cross between tennis, badminton and ping pong. It’s played on a court that’s about a quarter of the size of a tennis court. So, it’s a much smaller space. Of course, it’s played using a paddle and what I would best describe as a wiffle ball. People like it because it’s very fast-paced. You know, it has that ping pong type of speed, where you get these rallies going and it’s a really quick back and forth action. But people are also drawn to it because it’s easy to pick up. You can learn the game in a day.

Pickleball is typically played as a doubles game. There are singles games at the professional level, but on the recreational level it’s all doubles. And that’s the thing that draws people to it. It’s a really social game. You’re meeting lots of new people. And you’re usually cycling through different teammates in the recreational setting. 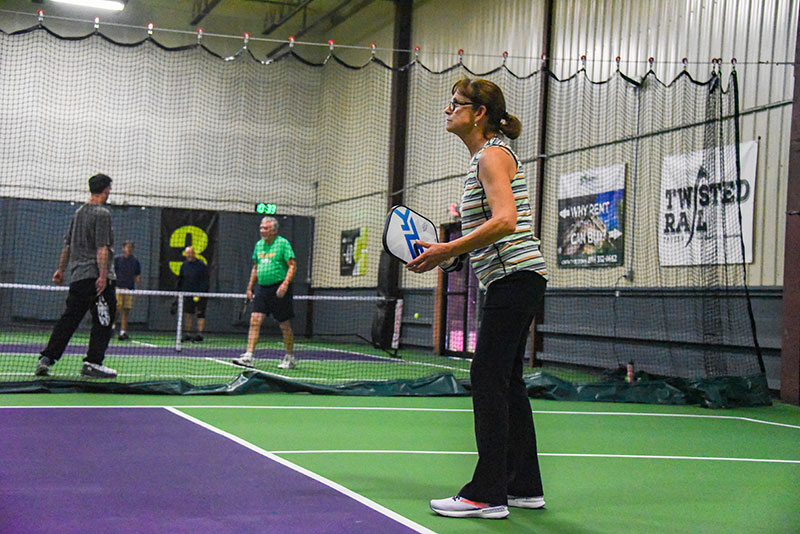 It was originally developed as a family game. But I’d say it’s a broad spectrum. We see kids and people well into their 80s playing pickleball. Right now, it’s become huge with retirees. It got really big in the “snowbird” communities in Florida and Arizona. And then those folks came back to their summer residences and the game just started to spread even more from there. So, right now, I’d say that the demographic is definitely the retirement age group from about age 50 through 80. But we are starting to see a lot of younger players picking up the game. That demographic is definitely growing. There’s been more of an effort recently to get it into high schools and colleges and gym programs. We certainly see a broad age range on the courts here.

Where did it all start for you? How did you get into pickleball?

So, I had this aunt bothering me for like a year. She kept telling me, “You gotta’ try this game. It’s so much fun.” And I resisted at first, but, like a lot of people, the first time I played, I was like, “Wow! This is a lot of fun.” And, next thing I knew, I was playing a couple times a week. I’d say that within three months of that first game, I was playing four or five times a week – often multiple times a day. The problem we had was that here, in our area, in the winter, we’d run out of places to play. And we wanted to create kind of a gathering space for people who were into pickleball. We wanted to create a place to play indoors all year round, and also have that social aspect of the game that people love – meeting new people, having fun, making new friends and essentially growing your circle. 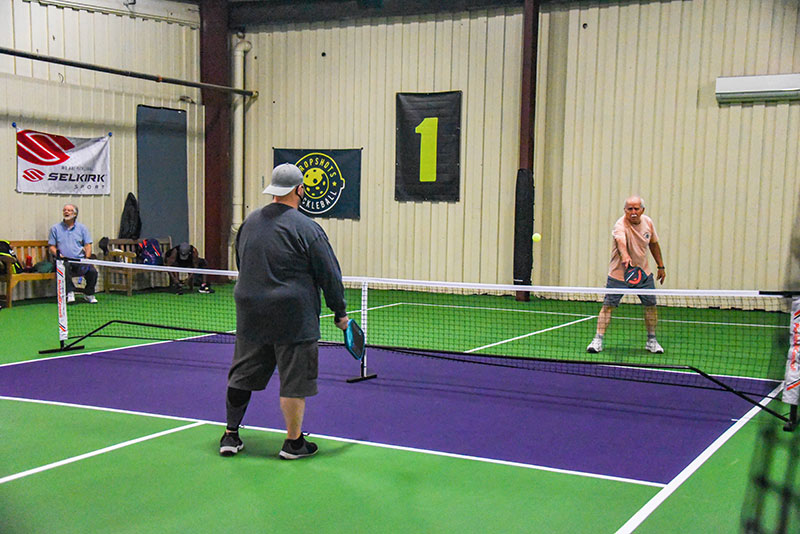 How has NEPA responded to Dropshots Pickleball?

It’s been great so far. We’ve had a really positive response. A lot of the local pickleball players are members now. We’ve technically been open for only a few weeks, and we’ve seen our membership grow significantly. I think we’re up to about 70 members now. We also offer a lot of open play times, where people can just drop in and play a game. And we’ve been getting really good crowds for those as well.

For someone on the fence about trying a new sport, do you offer lessons?

Yes. We call it our “cucumber” class. That would be a person who has never played. Our goal is to take them from having never played to understanding all the basic rules, to being able to carry on a volley and keep the ball in play. So, yeah, by the end of that class, new players usually have all the basic skills they need to play a game of pickleball. We also work with pickleball pros who teach more intermediate to advanced level skills. 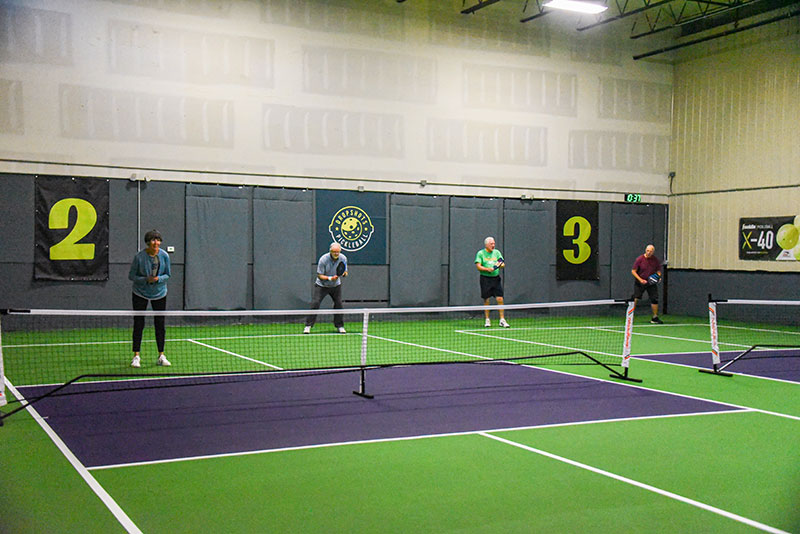 I want to play. Why should I come to Dropshots Pickleball?

Pickleball is a really, really fun game. Don’t be put off by the silly name. It’s fun for everyone, from the beginner to the advanced tournament player. And Dropshots is a place that is welcoming to all those skill levels. We just love teaching people the game and giving them something that they can enjoy not just as a game but as an outlet for exercise and for socializing. And for those advanced players, we’re a place where they can find a game that matches their skill level.

Last question – Can I now tell people that I know a professional pickleballer?

(Laughs) I’ve been playing a lot of pickleball since we opened — like every day. But I wouldn’t say I was a pro just yet. Maybe before long if it keeps going like this. 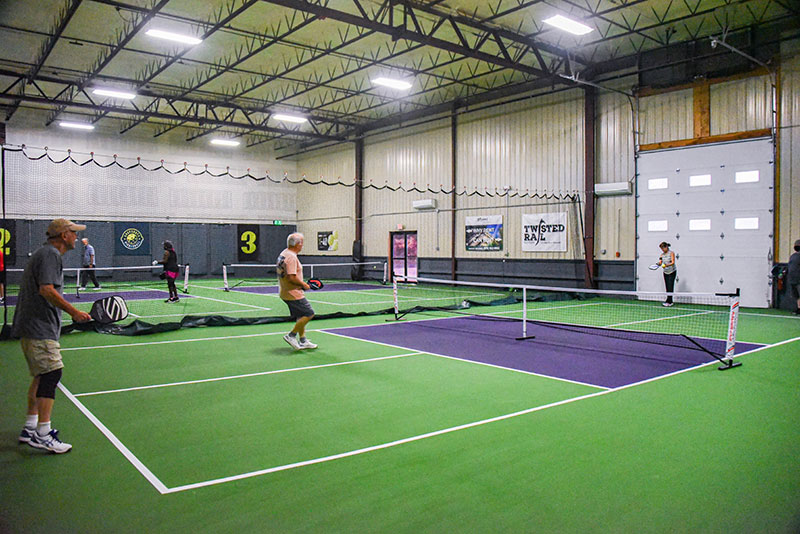 In addition to three regulation, indoor courts, Dropshots also features a pro shop with everything from paddles to bags to apparel and more. They even have gear you can borrow. And soon, you’ll also be able to play Glow Pickleball.

Stop by Dropshots Pickleball and watch a game. Talk with Matt or Christine about lessons, membership opportunities, booking the space for parties and more. Check them out online for FAQs and membership pricing and benefits. And don’t forget to follow them on social media for updates and information on all things pickleball. 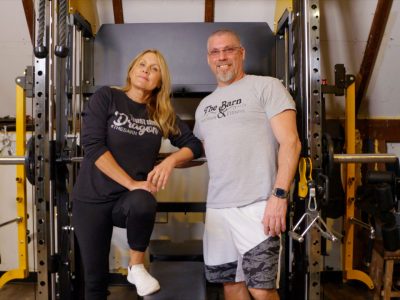 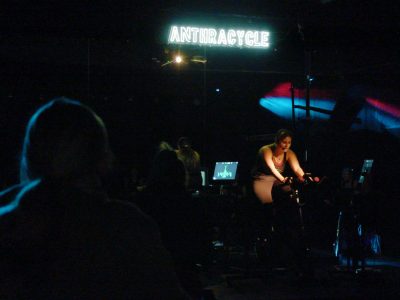 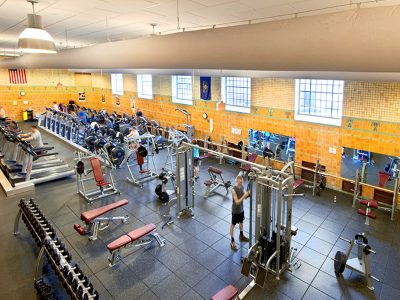 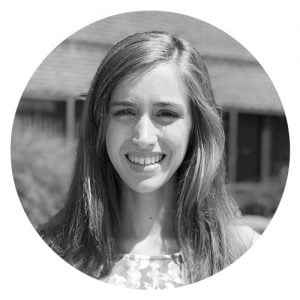