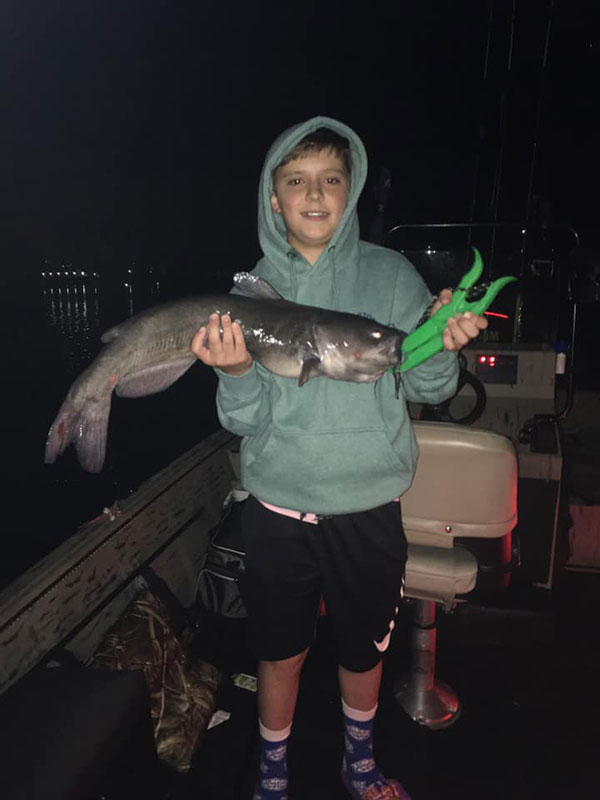 Discover the unseen beauty of the Susquehanna (and hook a few river monsters while you’re at it).

His students call him Mr. Fedorko. To his father, he’s Muskie Mike. For everyone else, Mike works just fine. And then there are those happy fishermen and fisherwomen who’ve spent countless sunny afternoons and tranquil evenings stalking the depths of the Susquehanna River from his jet boat. I imagine they’d call him the Catfish King.

About three years ago, proud Edwardsville native, Mike Fedorko started Still Fishin’ Charters. It was a simple combination, he says, of two things he loved – fishing the Susquehanna River and teaching. The industrial Arts Instructor at Greater Nanticoke Area High School has spent the better part of his life on the river – much of that time under the tutelage of his old man. “He had a small aluminum row boat with a little 10 horsepower motor on it, and we’d come down and fish until dusk after he got out of work.” He continued, “We caught tons of fish out of this river together.”

And now, with his own river charter service, he’s continuing that tradition.

I run more of a family-oriented guiding business. I take a lot of people out who are brand new to fishing. And I try to teach them everything they need to know in that trip, so that they can go out and do this on their own without me. Of course, I hope they come back in the future, but if they don’t, I know they’ve at least had a more educational fishing trip – It’s more than just catching fish. 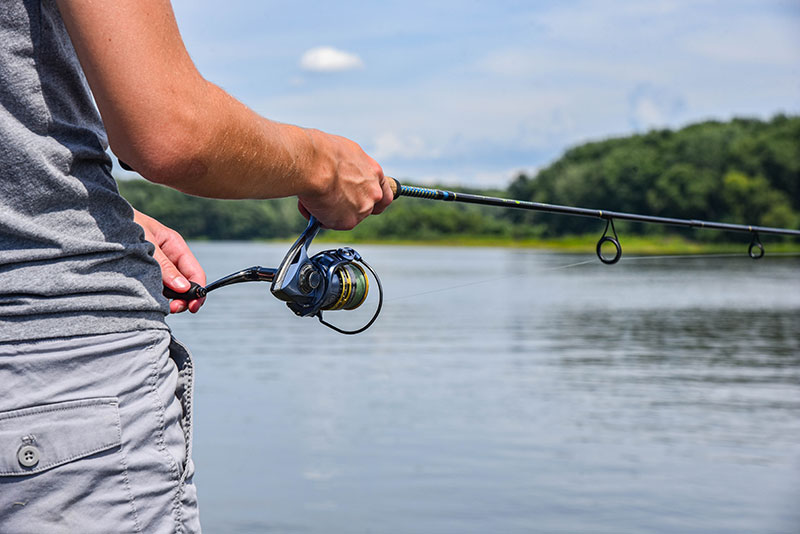 The river changes almost daily. It goes from clear to cloudy to full of mud and back. It’s shallow. Then, it’s deep. There’s smooth river rock below and then sand. Sometimes, you’ll even encounter magnificent and terrifying underwater cliffs. The fish use these changes to their advantage. And, that’s where the Susquehanna’s greatest challenge becomes a thing of sport.

Still Fishin’ Charters helps you escape the limits of shore casting. With speed and agility on the water and accurate depth reading and fish finding technology, they get you to the fish. The rest is up to you. “There’s not much that I won’t cover,” Fedorko says. “I have no secrets. I take people to the same places that I fish, because I want them to do well.” At the end of the day, each trip has the same, few simple goals. “I want everyone to have fun and learn and maybe catch a few big fish.” 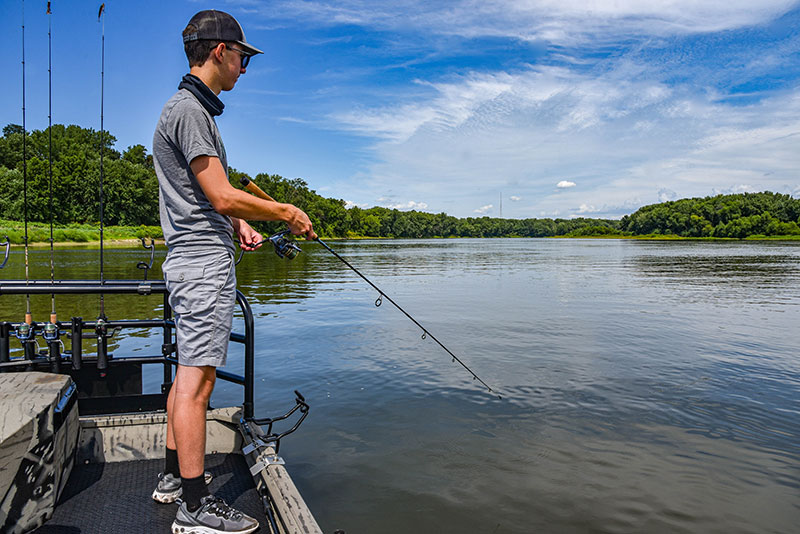 “This is my second year in business, and I’ve loved every minute of it.”

Fedorko’s charter service has attracted attention from halfway across the country. He’s had clients come in from the south, upstate New York and as far west as Minnesota. And, from trip to trip, he’s found, the level of fishing experience always varies. And, sometimes, so too, does the initial enthusiasm. “But once they get out there and they hook into their first channel catfish,” He says. “That’s it.”

Sometimes, Fedorko explains, he has trips where everyone has so much fun that they pay extra to stay out a few hours longer.

Even locals are hopping on board. Whether they’re experienced river fishermen, novices, or even Mike’s dad, everyone walks away amazed by the experience. And, for quite a few, catching fish is secondary. It’s almost inevitable, according to Fedorko, that at some point, the trip becomes more about how incredibly peaceful the river is at night, or how cool Wilkes-Barre’s skyline looks in the distance.

Being out on the water at night, you’re in a completely different element. The city, Wilkes-Barre, gets really, really quiet. And maybe a fog sets in. There’s absolutely no noise. And it’s all about that aspect of, “what’s going to happen next?” You know? And then you hear those reels clicking. 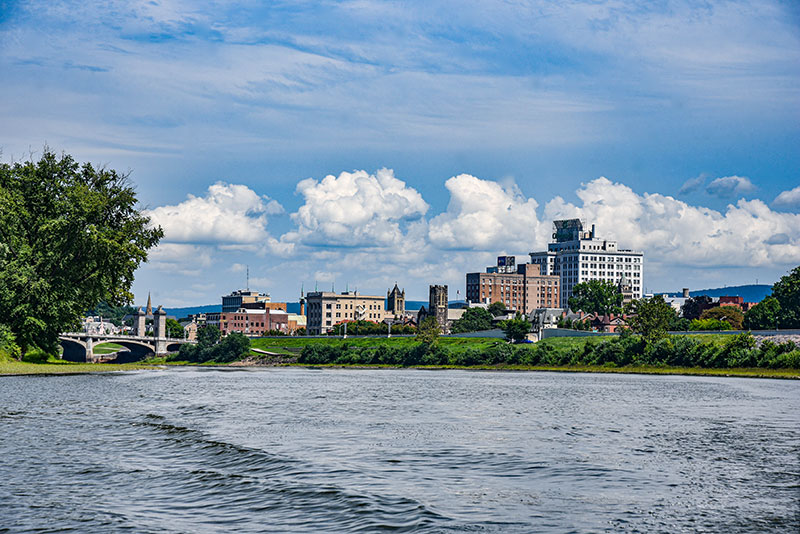 To see the river from a boat is to have your eyes opened anew.

The Susquehanna River, for so many, is a bit of a mystery. And, with mystery comes misconception. Fedorko, however, is on a mission to change people’s minds. He says of the river’s often-misconstrued reputation, “Look, the river’s always had a bad stigma to it. It always has.” He doesn’t gloss over the many decades of industrial abuse and neglect. Though he has been encouraged by clean-up efforts, both locally and state-wide, over the past few years. He continued, “Despite the fact that the river has been through so much over the years, it always has a way to turn itself around. It always bounces back.”

For Fedorko, there’s no better way to gauge the health of a river than to look at the fish. And, he’s seen nothing but strong, healthy fish of every species for years. From panfish and smallmouth bass to monster catfish and big predators like northern pike and muskie, there are plenty out there. And, according to Fedorko, they’re biting. 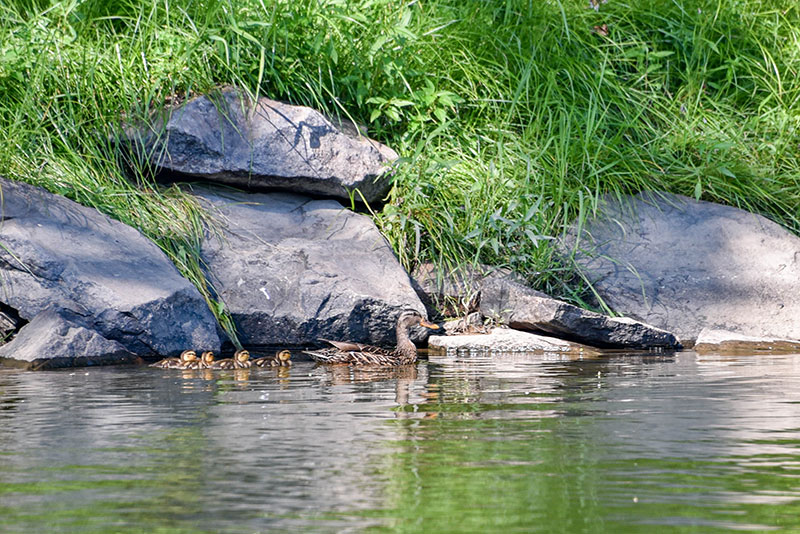 Do not forget your camera!

Fishing the Susquehanna by boat offers a point of view rarely experienced by most anglers. From city to city and the stretches in between, the shoreline takes on dramatic, photogenic changes. And, in those times when the bite is slow, the river will always entertain.

You may cruise by manicured lawns that back right up to the water. Now and then, you’ll catch the occasional coal era mansion peeking out over the levee. Then, within a few hundred yards, you’re in a scene reminiscent of the Amazon. Thick jungles of vegetation bend toward the water. Muskrats make for the sandy bank at your sudden intrusion. And a momma mallard passes nonchalantly with ducklings in tow. 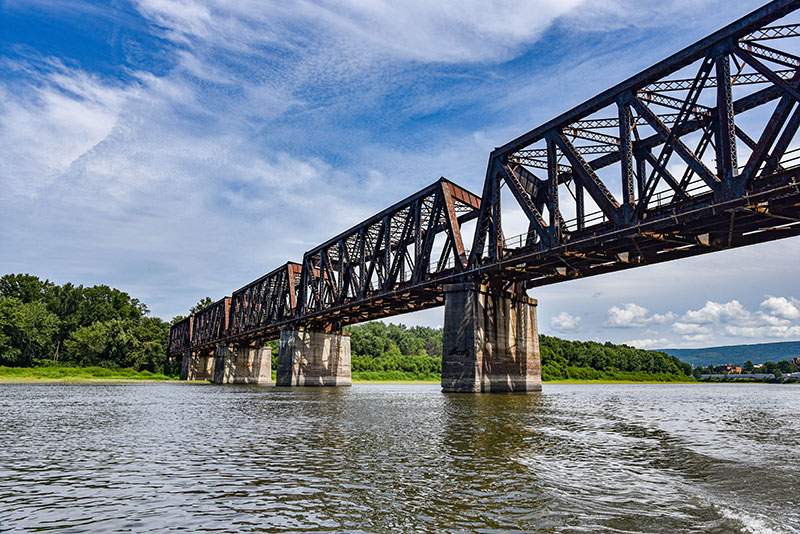 “There are no jet skis, no water skiers, no party boats. There is nothing. It’s just us.”

You can easily lose yourself counting tail-dipping dragonflies and the fat carp rolling after them. In a flutter, a majestic heron glides off into the blue before diving toward the opposite bank. Soon, NEPA’s not-so-distant history – a stout span of rusted iron and rail bed breaks the horizon.

Somewhere around here, Mike Fedorko finds the root of his passion for the river. There’s a diorama, of sorts, displaying the unique beauty of Northeastern Pennsylvania in one simple scene. “It’s one of the only places that I go. I mean, I have the ability, with a boat, to go pretty much anywhere that I want, and I always come back to the river because it’s so peaceful.”

Yeah… We Also Did a Little Fishing 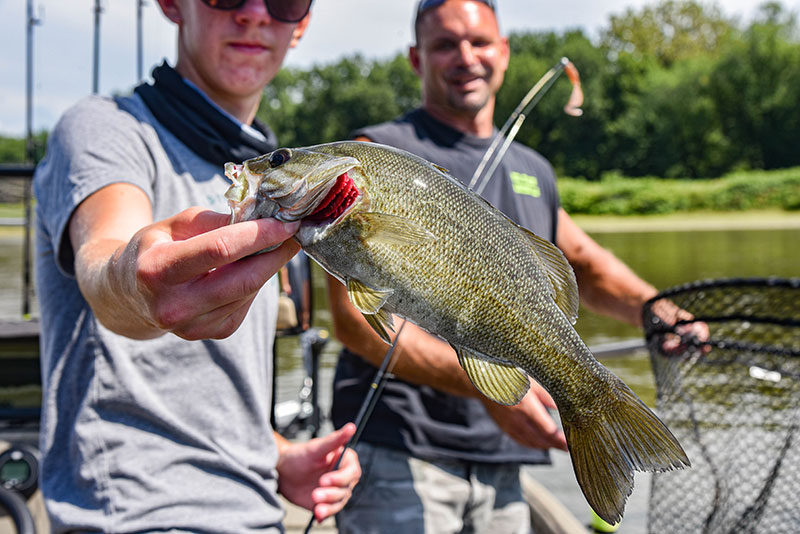 There certainly exists a temptation to forget your purpose on the river.

We came here to fish. And we did do that. Of course, it’s a little more exciting when you’re surrounded by experts. Despite the blazing sun and stained water conditions, Mike found the fish. From there, it was up to one of our hired ringers to get them on the boat. He was able to coax a few smallmouth bass out of their late summer lethargy. In all, we fared well in typically un-fishable conditions.

Toward the end, though, we all began to suspect this trip was more about the ride. We saw the river in a new light. And we listened to a story unique to one man, yet, with a few subtle variations, one that might ring similar to generations of local anglers.

The river connects. It links small towns to cities, nature to human, our past to our present. We whisper its name in fish stories always too incredible to be true and in secrets passed between fishermen old and young. It connects and it carries on, writing a million such stories a day and dishing them out freely at the slight tug of your line. 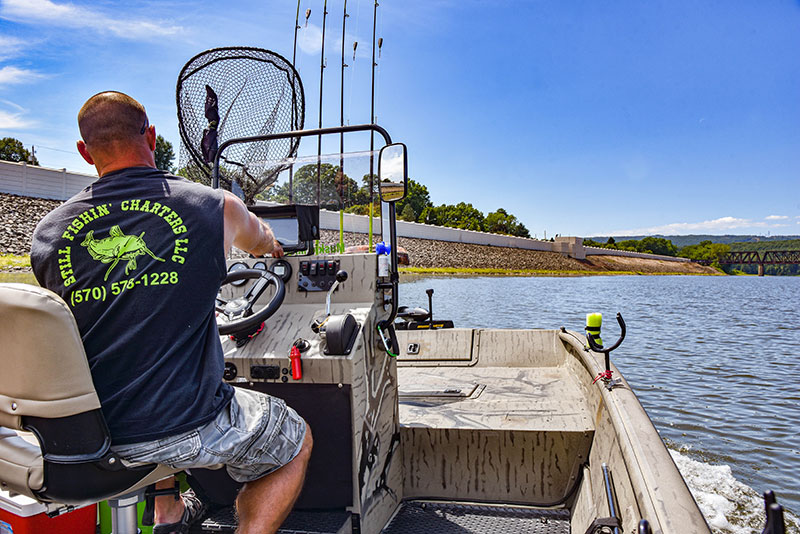 All you really need is a willingness to have some fun.

Still Fishin’ Charters offers family-oriented, day and night fishing trips on the Susquehanna River. All excursions begin at the Nesbitt Park Boat Launch in Kingston. The full-service, guided trips include space for up to 4 anglers on the boat and all rods, tackle and bait. The boat features state-of-the-art fish finding technology, plenty of life jackets and room to spread out.

Whether you’re a bass master-in-training, or in search of those elusive river monsters, Still Fishin’ Charters has an excursion for you. Contact Mike today and book the unexpected trip of a lifetime. 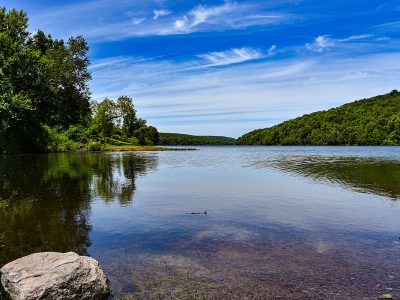 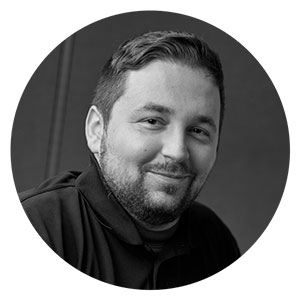 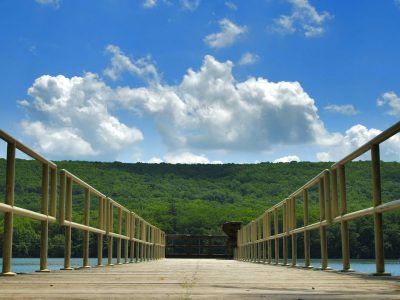 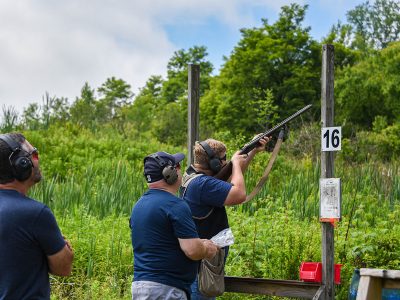