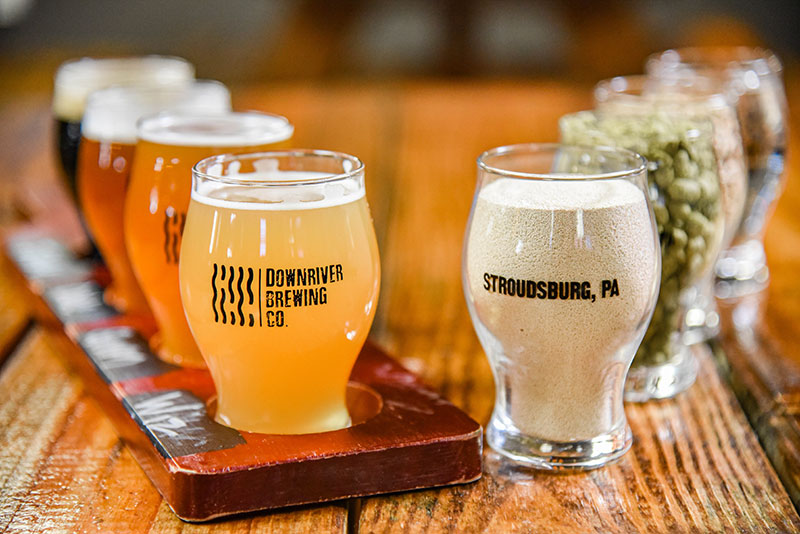 Near the end of a long, hypnotic dive into the Endless Pocono Run section of the DiscoverNEPA Brewer’s Loop, we happened upon Downriver Brewing Company.

In mid-December, just after our first “real” dose of snow, we decided to get back out there on the Brewer’s Loop. It had been a while, though it felt about the right time to start shaking off the dust. We missed the beer, of course. And we missed that warm, resinous, vegetal funk of a steaming brewhouse. Mostly, though, we missed the people – the good, honest, blue-collar beer people of Northeastern Pennsylvania. So, off we went determined to find more of them.

We set our compass southeast, chose the lightly trampled path and headed off into the blinding white horizon of a snow painted Pocono wilderness. For a good stretch, our journey bumped along in similar fashion to that of the old Wilkes-Barre & Eastern rail line. The short-lived hill topper from the Diamond City spent the turn of the century humping anthracite to New York by way of connection in Stroudsburg. In short time, they added a few passenger cars, and filled them with eager travelers from the coal-monied cities of the Wyoming and Lackawanna Valleys. 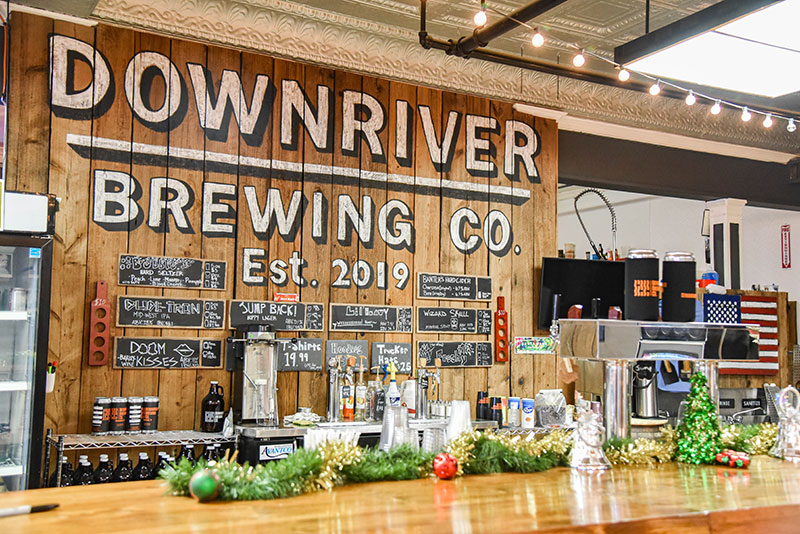 Some called it the “Turkey Line” – lots of quiet forest, mountains, pastures, all abundant in wildlife. It steamed eastward out of the valley onto the Pocono Plateau and dropped dramatically down the other side into the Delaware River Basin.

We floated like ghosts along this old route – a couple of early 20th Century tourists pioneering the rugged Pocono winter landscape. Back then, they hopped aboard that train for many reasons. Some, eyes aglow with bright lights, envisioned grander destinations. Many just wanted to escape for a day and maybe slow life down a bit. Still, others looked for love. They looked for land, for jobs, for some unique opportunity. And quite a few of them found it right there at the final stop — Stroudsburg.

As for us, we were simply hitching a ride, man. That, and we had learned of a local craft brewpub occupying the old Wyckoff’s Department Store on Main Street. Talk about seizing opportunity. They call themselves Downriver Brewing Company. They’re set up in the back of the place, in the old Tea Room. It was, for many years, THE place to see and be seen. In some ways, it still is. Only, now, from trim to transom, it’s all about beer – fresh, delicious and local.

Let’s go take a tour and tip a few, shall we? 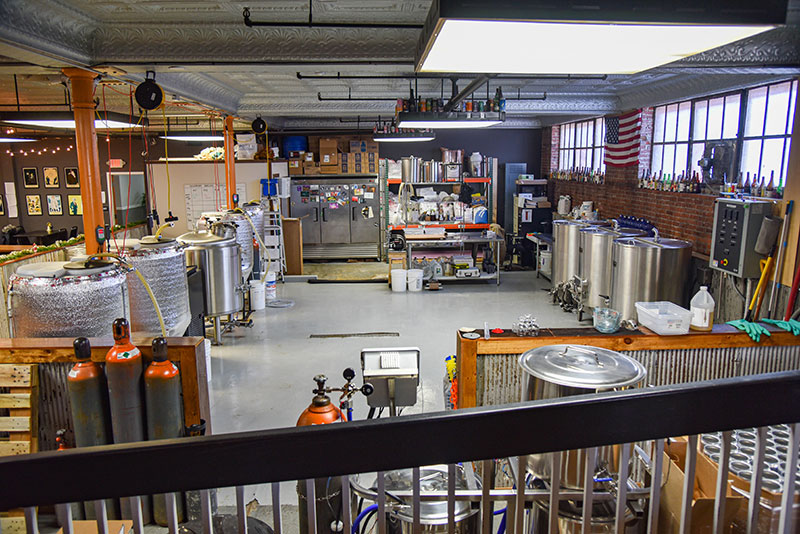 In the spring of 1935, the Neustadtl Brewing Company, successor to the defunct Stroudsburg Brewery Company, dispatched its last 30,000 gallons of Gesundheit Lager into Broadhead Creek. The brewery had gone under. Soon, the idea of a local, hometown beer was but a memory – a sudsy specter floating into obsolescence on soft dissipating ripples.

The spirit of those old breweries haunted the town for decades to come. Kitschy marketing calendars, commemorative tankards, steins and other remnants would pop up in dusty old attics. Soon, “Hey, remember this place?” turned to “Wait, we used to have a brewery?” And then ultimately to “Yo, this old beer sign would look sick in the man cave, bro.”

For some, thankfully, the spirit of these old, local breweries inspires more than an innate desire for vintage kitsch. It possesses the mind and body. It guides hands engaged in brewhouse labor. And it flavors notes of inspiration in the brewer’s musings. The team at Downriver Brewing, whether they know it or not, have awakened in Stroudsburg a long dormant connection to its own history. They brought local beer back. 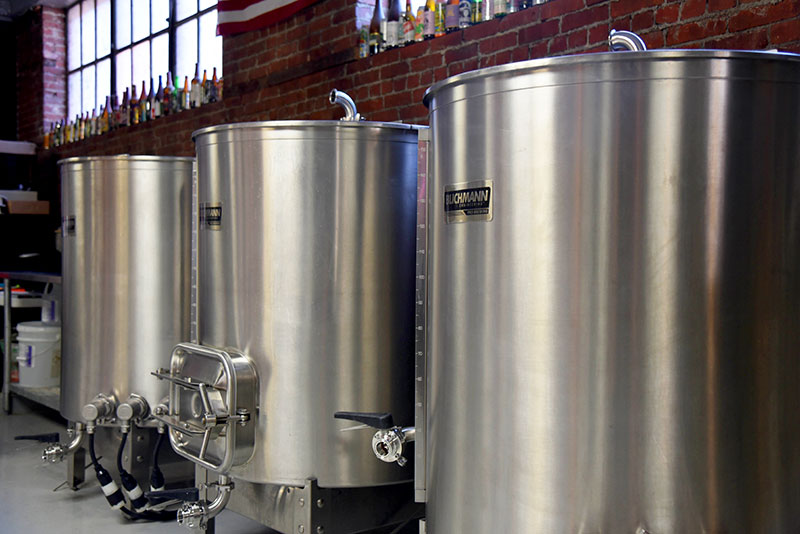 A knee wall runs the length of the space at Downriver. It separates the brewhouse — work side from the taproom – fun side. This playful dichotomy also carries into the brewer’s workspace.

The painted concrete floor and exposed red brick walls deliver a welcomed sense of utility. Afternoon sun floods in from massive clerestory windows, bending from floor to fermentation tanks to boil pots. Remnants of maybe a few too many honest R&D workshops line the windowsills. Hoses, ladders, buckets, vials and scales burden a baker’s scaffold in the corner. The room requires work – the kind that sends you home dirty. Not a knob resists turning, nor a tool welcomes rest. 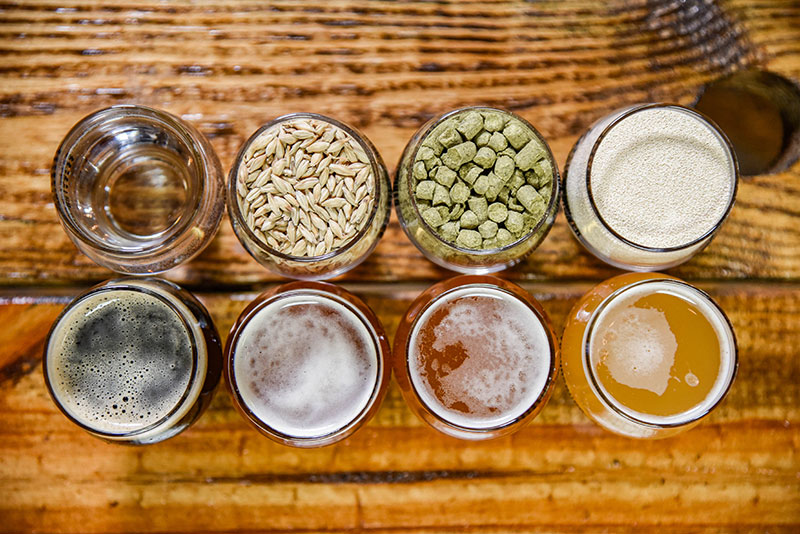 And it all takes place beneath the original, turn-of-the-century tin-tiled ceiling and ornate cornice work. That matters here. Not only has Downriver Brewing resurrected the very idea of local beer in Stroudsburg, they’ve done it in one of the town’s most beloved buildings.

So often, history fades right before our eyes. Those ghosts who, decades earlier, elbowed up to the table at lunch meetings in the Tea Room. Families school shopping at Wyckoff’s — reluctantly bringing on an end to summer. Stone-faced, sullen men pouring their hard work, their liquid pride into Broadhead Creek. They’re here. Every pint tells their story. Every bit of laughter continues the conversation.

Let’s hop over to the taproom and see if we can’t conjure up some of these ghosts. 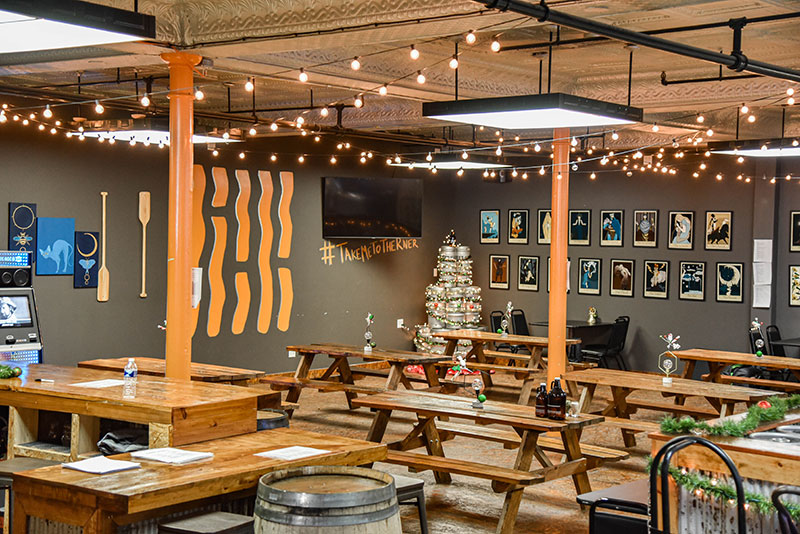 Take me to the river.

On the other side of that pony wall, Downriver’s taproom exudes simplicity and comfort. As in the brewhouse, that delicate ceiling is ever-present, looming, reminding. The story from there on down, however, is one of reclamation and repurpose.

There’s this whole rough-cut, scuff the floor, “friends in low places” vibe to the space. The stained plywood floor shines under fluorescent drop lights and a zig-zag of stringed Edison bulbs. Classic wooden picnic tables fill out the room. Steel stools line the workbench-styled bar. Dings and dents lend a bit of rustic charm to the galvanized steel wainscoting. And if you’re not careful, you’ll bump into a few old barrels here and there.

It’s not necessarily “Tea Room” fancy. I guess, in a way, we can call it taproom fancy. There’s plenty of comfortable places to sit, music, a TV and fresh, cold beer. Does one actually require more than that? They even had a Christmas tree made out of stacked kegs, complete with garland and lights. Little hints throughout, like oars and river symbolism remind that the Pocono Mountains are just outside the door.

They save plenty of room for a little fun, too. A small, raised level at the back of the room hides a pool table, a few games and dartboards. The floor space is optimal for the occasional live band, or DJ. They frequently host insanely popular trivia nights. And there’s a small kitchen slinging out bar staples like nachos, massive soft pretzels, tacos and more.

Overall, the taproom space at Downriver Brewing is communal. It’s warm without effort – welcoming without warning. It’s drop your pretensions at the door, leave your 9 to 5 at the curb and enjoy a cold one… then another… then… Well, you get it.

And now, a few words about the beer… 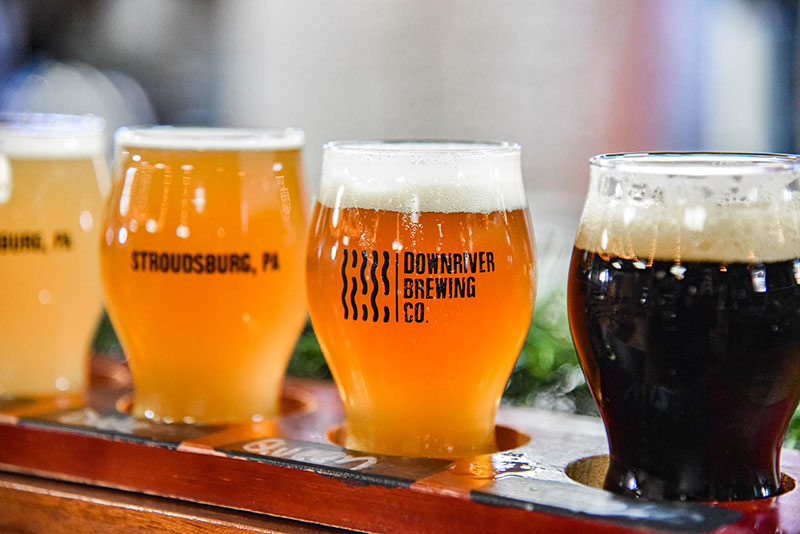 Landing somewhere between nostalgia and new.

Downriver’s Master Brewer approaches beer with an interesting and somewhat puzzling philosophy. He’ll brew anything. More importantly, he’d prefer to brew beers that he doesn’t even particularly enjoy. Was that a record scratch? This approach, however, has little to do with pretension or snobbery. In fact, it’s all about respect, learning and building a repertoire guided by mastery of style rather than public demand. Sure, they’ll always have the crowd-pleasing IPAs and stouts, but they also want to keep patrons on their toes. For this team, the world of craft beer is one of exploration not consumption. Now, I wouldn’t presume to speak for all craft beer drinkers, but I think I can confidentially say, yeah, we’re down with that.

During our visit, the tap list offered a mini tour along the craft spectrum. The ales covered everything from light and simple to complex and somewhat experimental. Plenty of delightful fruits and sours made a welcomed appearance. We got to try the last few pulls of a delicious head-knocker of a barleywine. And then there were a few not-quite-beer options like seltzer and ginger beer. 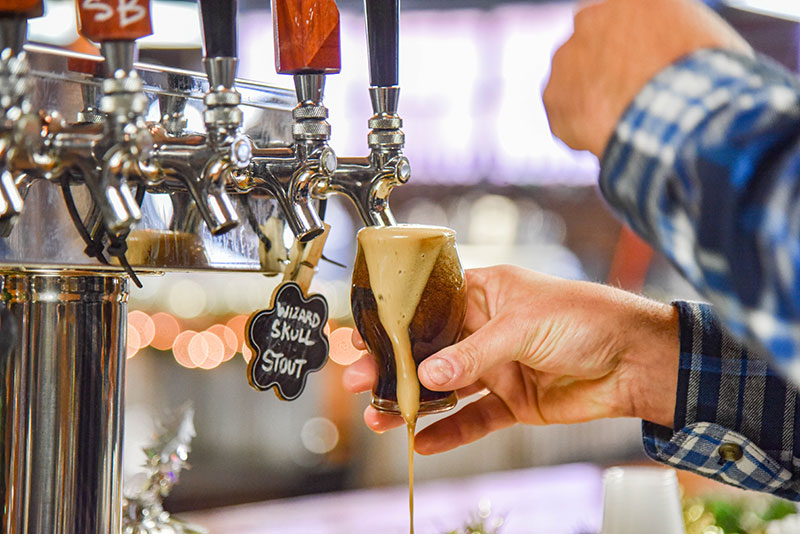 Let’s start with the Pale Ales. Queen Street is a Downriver staple. This true-to-style ESB (Extra Special Bitter) balances a sweet, malty, bready backdrop with a delightful dose of bitter resin and citrus. Freshy, their king supreme NEIPA (and local favorite) ups the ABV game a bit. It’s crushable for a 7%-er. We were getting sweet, tropical candy notes and an aroma not unlike opening a fresh pack of Starburst. The final entry in this style was likely the day’s winner. Dude-Tron is labelled a “Midwest IPA.” Never heard of it? Well, naturally, it falls somewhere between a New England and a West Coast IPA. And it lands beautifully into that space. It’s smooth and sweet and malty with a slight creeping bitterness. If I may be so bold, it reminds somewhat of Bell’s Two Hearted Ale.

From there, things got a little darker. Wizard Skull is their signature Imperial Stout. And it hits the mark. This beauty is gorgeously dark with strong coffee aromatics and smooth caramel notes. We also got our hands on one of their last pints of Doom Kisses, a hefty, copper-hued barleywine. It’ll trick you with sweet notes of honey and stone fruit, but don’t be fooled. This one can knock you off your stool if you’re not careful.

Finally, we rounded out the day with a couple of sours. Tropical Storm Guava is a sour IPA, coming in at 6.5%. It may have been snowy and cold outside, but this one was tropical and screaming summer cruiser. Tart Beneath the Veil, their fruited sour, steps it up a bit with a slightly sweet lead into full-blown tart-sour deliciousness. We also have to give a little shout out to Spoon to the Moon, a Moscow Mule-inspired, hard ginger beer. And, of course, we can’t forget Bubble, their seltzer, which is, you know a seltzer (Sorry, if you follow the Brewer’s Loop, you know how I feel about seltzers).

And that about does it. We made our way to Downriver Brewing Company on a sunny, chilly Friday in December. We were looking for a great story to pair with a couple good beers. And we found both. When you get a chance, go check out charming Stroudsburg and, while you’re there, pop into Downriver for a pint.

Dude-Tron – Midwest IPA, strong malt backbone, perfect piney bitterness. An artfully balanced beer with a touch more personality than anything that’s ever come out of the Midwest.  – 7.8% ABV

Doom Kisses – Barley wine, Stone fruit, honey, pine. If you plan on more than one, wear a helmet – 11% ABV

Not The Muffin Man – Imperial Brown Ale, fresh ginger, molasses, Ginger Snaps. Sampled this one right from the tank. Not normally one to brag, but… first! – 9.1% ABV