These hills were made for music.

Upon exiting the thunder of Interstate 80 and climbing Route 93 out of Drums, the road hums a familiar summer tune. A warm breeze whistles through thick pine limbs tangling and rubbing clean the dead of winter. An electric green tide rolls in waves across the open stretches. Young corn blades weave effortless like fiddle bows against sturdy stalks.

This natural ramshackle composition comes together, I guess, only for those who welcome it. Some travel this road and never notice the cricket’s ballad, the bass lick of a bumble bee, or shaky fence posts steady knockin’ a 4/4 beat. Perhaps, there are other roads in this world so alive with rhythm – so attuned to the sacred soul of the mystical and the musical. Perhaps. But this one leads to the Briggs Farm Blues Festival. And, if you go, you know. 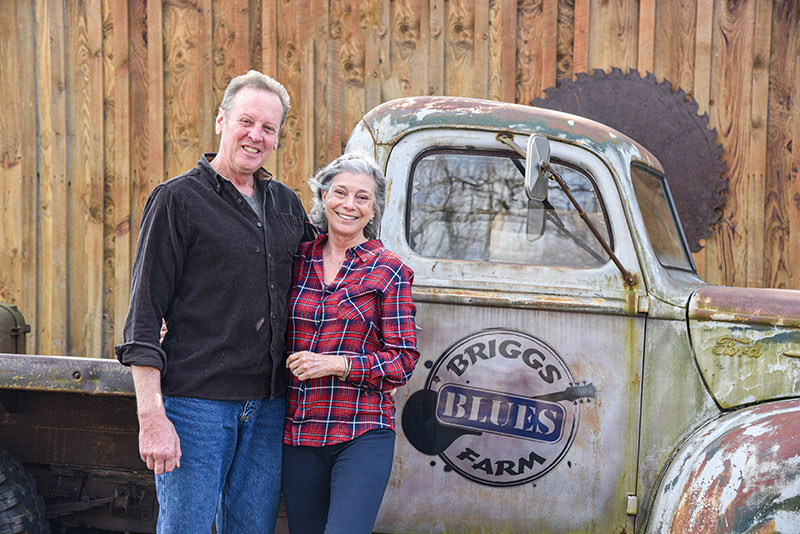 And if you’ve never been, you just might want to check it out. We caught up with NEPA’s first family of blues at the famed farm in Nescopeck Township. They warmed over the rustic farmhouse kitchen/office with tales of festivals past and unforgettable acts. And they even offered a vision of what’s to come for the “best weekend of the year.”

24 Years of Delta Blues, Roots Rock and Americana on the Farm 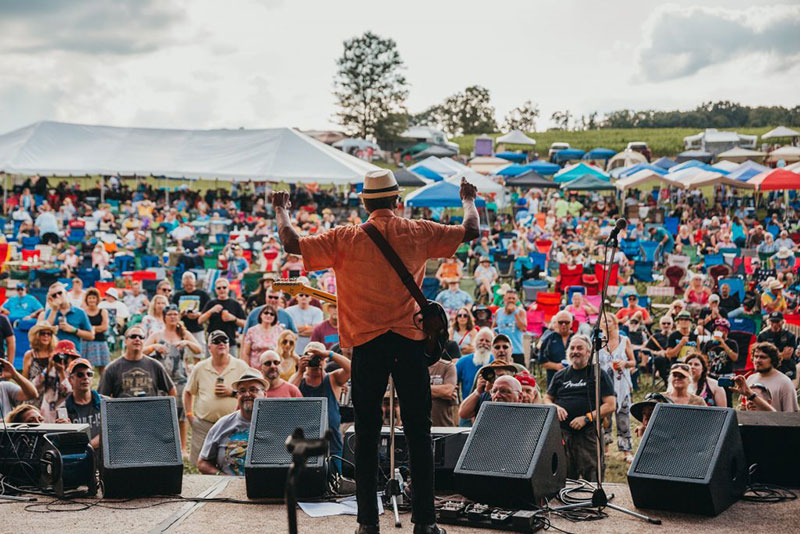 From one stage to two, from one day to three…

The mother seed of NEPA’s only award-winning blues festival took root during a steamy July in 1998. Six acts graced the smaller, single stage that day. The sweaty, energetic crowd, unsure of quite what to expect, found themselves electrified by the experience. Many, in fact, still attend to this day. Some, even, whose names and faces have hardened into the clay of this team’s collective memory, have helped to shape the festival’s journey. 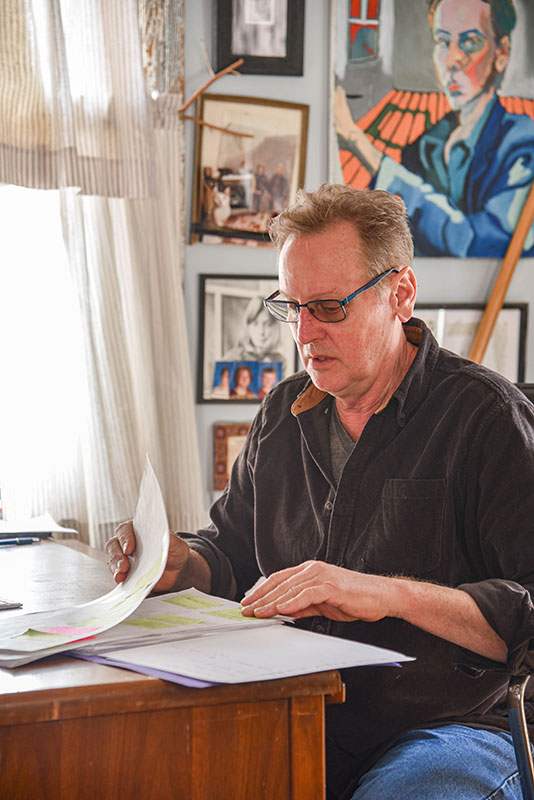 Richard pores over the latest version of the festival’s lineup.

Founder, and festival patriarch, Richard Briggs grins as he visibly searches his memory. His elbow-worn desk and the boot-scraped legs of his chair have long given up their shine.

“One of the biggest things that we didn’t have the first year was camping. And the first year that anybody camped it was just one car,” he remembers. “They asked – ‘Can we stay over night?’ And that’s kind of where it started, I guess.”

Alison Briggs, festival matriarch, occupies the opposite end of the cozy, box-shaped kitchen. She runs through an invisible rolodex – thousands of faces and names. “Who was that?” she asks half quizzical, half curious.

Alison prefers to work from the kitchen table. Her voice seems to echo from the mouth of the massive brick hearth behind her. The careful order of papers, photos, post-its and plans parallels her often measured tone.

“They still come every year,” she offers.

Richard leans back in his chair. He looks out the window as if glancing through time.

“They parked up there in the corner,” he signals with a nod. “Now, we have 2,000 people staying the whole weekend in those woods.” 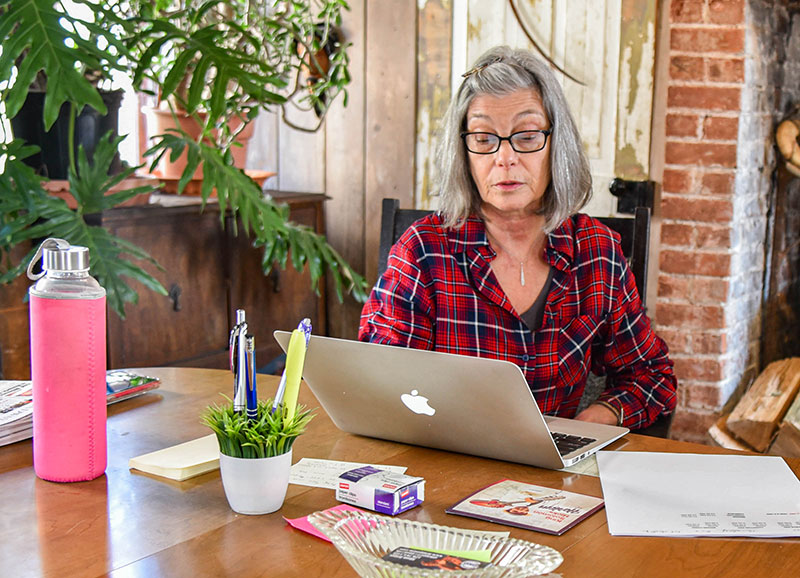 Then, there was merely a smattering of die-hard blues fans spread out on the hill. And every year since, the festival has grown in some significant way. In recent years, crowds have clocked in nearer to 10,000. And they’ve got the room for plenty more. For the team behind the festival, however, the size of the crowd has little bearing on the non-corporate, family-friendly experience they work so hard to provide.

Maegan Beishline heads up festival marketing efforts from the office’s sunniest corner. For her, the festival’s natural and necessary growth is part of a complicated balancing act. And it all comes down to one overriding question. “How do we grow while maintaining the environment and atmosphere that is key to what we are and what people come here for?”

Some of that growth will be on display this July as they unveil the new, larger main stage. This change is directly related to Maegan’s point about maintaining atmosphere. “One of the thoughts we all had, as we were deciding to build the bigger main stage was that it would help with the idea that it was getting a bit cramped,” she says.

That cramped feeling, all agree, is something you get at big, corporate-sponsored festivals. And that’s not what these folks are all about. So, they’ve moved the stage back a little closer to the woods. They made it a bit bigger and opened up the space. According to Alison, “It just creates an easier set up for everybody and allows us to get more people in.” 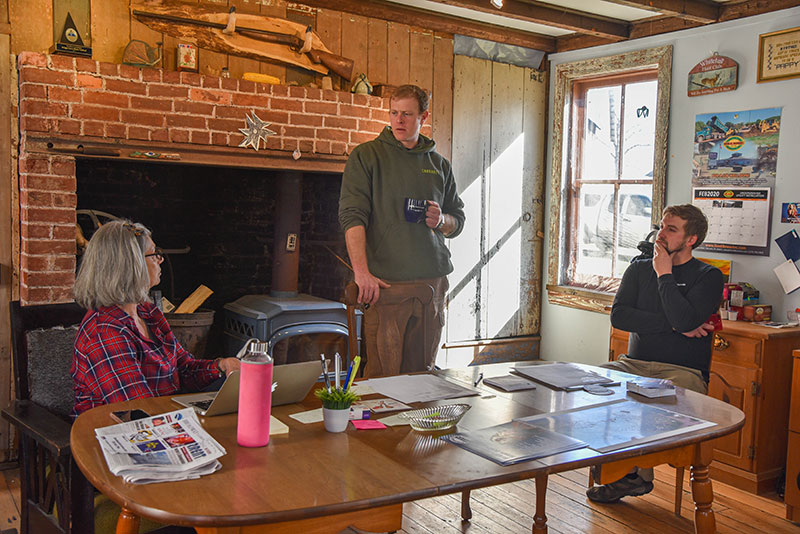 2021 also brings exciting changes to one of the festival’s most iconic features — The Back Porch Stage. This year, the more intimate space will be sponsored by the legendary Martin Guitar of Nazareth, PA. The storied company will also host a “Behind the Music” series during the festival.

And look for enhancements to the festival camping experience as well. Citing a need from families, reuniting college pals and larger groups, they decided to offer a premium reserve camping program. The premium reserve sites line the audience field, offering incredible, unobstructed stage views. The sites are open to both RV and tent camping. They are, however, already sold out for the 2021 festival. Of course, as of this reporting, they’re still offering regular reserve campsites.

So, what has happened over the years is that people have had a really good time and either they use this as a way to reconnect with college friends, or for family reunions. They come from different parts of the country, but they plan to meet up here again. And it can be stressful to organize that. That’s why we started the premium reserve camping. You can purchase this spot and have room for all your friends and family. Everyone else in the group just has to show up and buy a camping ticket and they can use the spot as well. 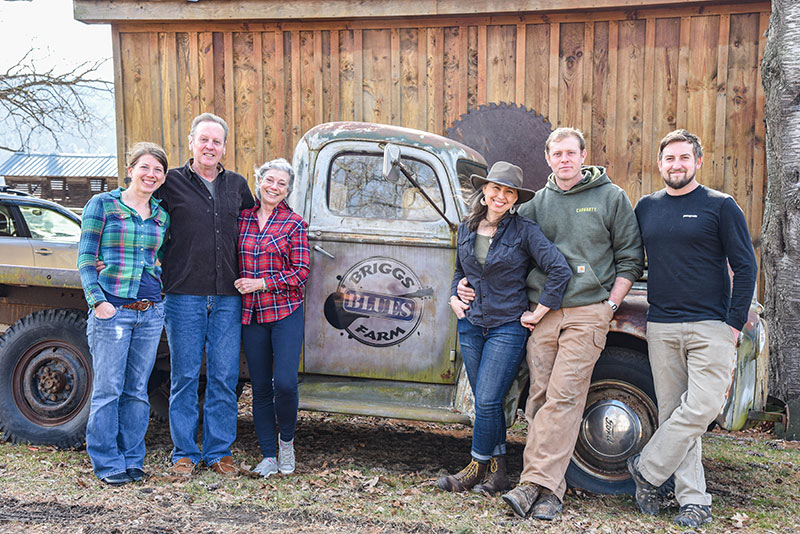 Rooted in a love of music and a desire to share it with down-to-earth generosity.

Planning is well underway this winter at the Briggs Farm nerve center. Outside, the festival’s lush, green fields lay in frosted dormancy. A wood stove warms over the 19th century summer kitchen-turned office. The room boasts a longevity present in a mish-mash of modest, handcrafted furniture and a design beholden to some long-misplaced utility. Half-painted barn sash windows magnify the mid-morning sun, setting ablaze the rosy hue in the bare plank floor. This old kitchen, fall through spring, is where the tires are kicked and the gears are greased. 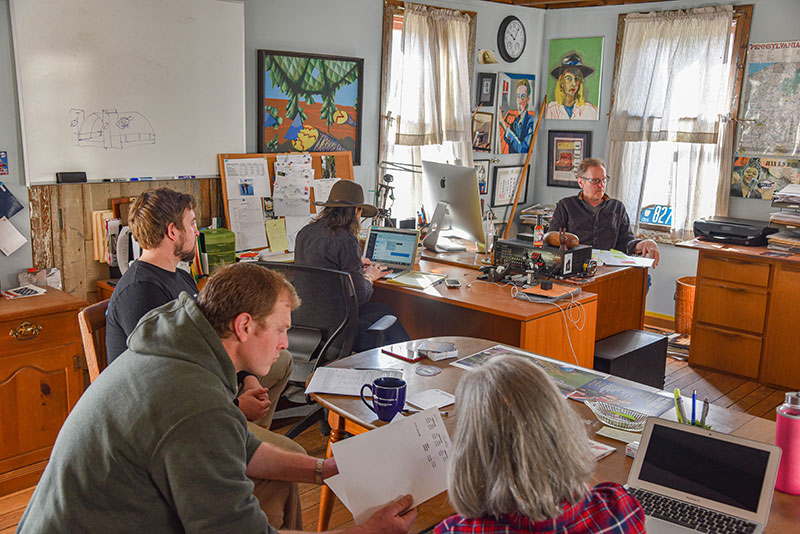 The festival team gathers in the farmhouse kitchen for a morning briefing.

Dena Briggs, Richard and Alison’s daughter-in-law, tends to a never-ending stream of vendor emails. The brim of her fedora settles on the brink of astute seriousness just above her brow. She types away quietly. Evidently, she’s been absorbing our conversation about the larger logistical concerns of parking and camping. She turns with a smile and the whole façade crumbles.

“Even if you’re the last person through the gate, there’s still a space for you,” she adds abruptly. “We’ll find you a spot.”

For Dena, much like it is for Alison and the rest, the festival grounds, the camp woods, this kitchen are all an extension of her home. And the musicians, the guests, the volunteers — they’re family – blood or not. And nothing makes her happier than the thought of this great, big extended family of strangers enjoying some music together in the summer.

Dena and her husband, Dylan (Richard and Alison’s son) share the festival Co-Owner mantle. And they’ve watched their own boys grow up on the farm and at the festival. Their sons, Mitchell and Lewis also help to manage much of the festival’s day to day operations. Throughout festival weekend, Dena admits she can’t help but smile when she sees a kid really getting into one of the bands.

We have a lot of people who first came here as kids, and now they’re continuing a tradition with their kids. And our back-porch stage is so small and intimate that you can get really close to the artists. So, if you have a kid who’s into music, shove him up there! Get them to the front and let them see what a professional musician looks like up close. You can do that here!

There’s a Little More than Just the Blues Going on Here. 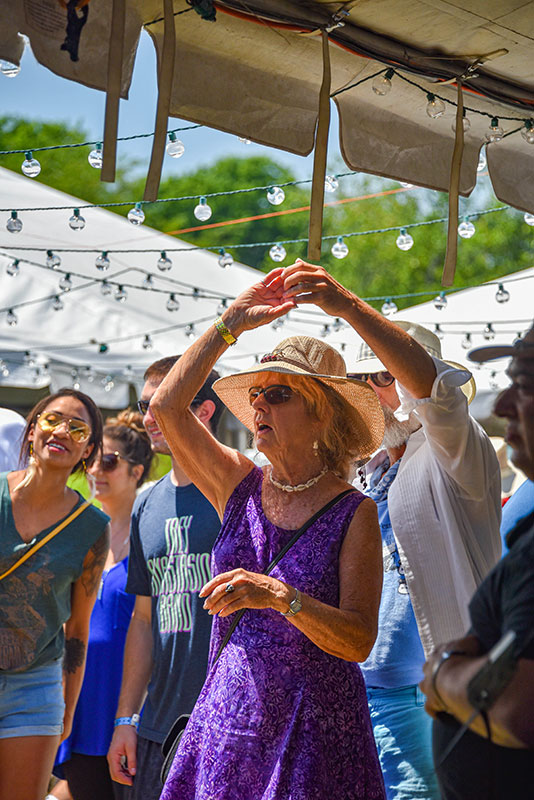 Festival goers, young and old, mix it up near the Back Porch Stage.

You’ll come for the music, but you’ll come back because you’re family.

Oddly, while I steered the topic this way and that, the conversation always came back to family. Sure, Richard can wax poetic for days about the new bands he’s constantly discovering. And no one animates old tales of Big Jack Johnson with his big ol’ hands wrapped around a fishing pole quite like Alison. The stories they’ve gathered through the years read like an odd, disjointed family memoir. Everyone, it seems, is an uncle, an aunt, an old family friend. And that includes security guards, fans young and old, musicians… the list goes on.

Toes in the grass at the always entertaining Back Porch Stage.

This whole thing, of course, is all about the music. But, in so many ways, there’s something more to it – a connection. Call it cosmic. Call it spiritual. Quantify it however you like. It’s here and it emanates from this warm, little kitchen in the dead of winter. It breathes green blood back into each blade of grass through the spring. And come July, it enters between your toes and, before you know it, you’re up dancing and singing.

From Dena and Dylan to Mitchell and Lewis to Maegan and Main Stage Manager, Bobby Kelchner, there’s a sense that, over the years, Alison and Richard have built something special here.

Alison sums it up precisely: “We are rooted. We are a family. Our grandkids, our kids, us… our adopted kids (nods to Maegan and Bobby) – this is where we live. This is our home. And the people who come here know it.”

And, for one weekend every July, these fine people open up their home to you. Do yourself a favor and discover the Briggs Farm Blues Festival this summer. And if you happen to see Alison (or Dena), go ahead and shout, “Hey Mrs. Briggs!” Trust me, they won’t mind.

Check Out This Summer’s Amazing Lineup:

Due to evolving health and safety guidelines concerning COVID-19, we advise you to confirm changes to event procedures directly with venues prior to visiting/purchasing tickets.