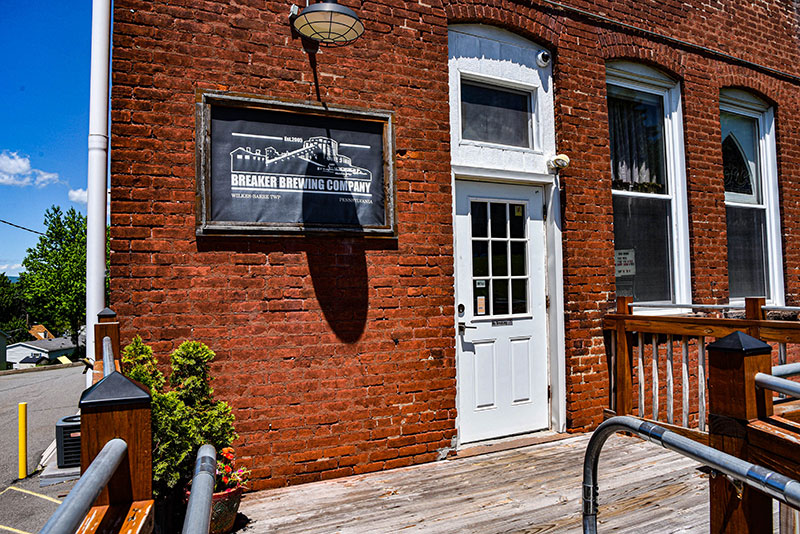 Located near the middle of the Susquehanna Stretch on the DiscoverNEPA Brewer’s Loop, you’ll find the Breaker Brewing Company.

This popular homegrown brewery sits atop the famed Northampton Street in Georgetown, a fiercely independent, blue collar village in Wilkes-Barre Township. And much like the town it calls home, Breaker Brewing was born of hardy stock and equal parts ingenuity, necessity, passion and a thirst for autonomy.

Their story follows a trajectory similar to most successful craft brewers. The journey began with hobby kits. It quickly scaled up to a garage operation, and eventually into a full production, stand-alone brewhouse. What sets them apart, however, is their location. Every can or pint of Breaker Brewing’s delicious beer is brewed inside the nearly 130-year-old, former Saint Joseph’s Church.

It’s fitting, in a way, to consider the destiny being fulfilled here. Saint Joseph’s, for over a century, brought a community together. Whether it was through weddings, christenings, or their once famous annual bazaar, this place always stood as a font of great joy and healing for the community soul. But things change. Now, more so rapidly than ever. And, soon the memory of this place slowly scaled and peeled off into the farewell breeze of each passing generation. Though, before it would be forgotten, it would be saved… by beer.

The memories of a place exist only in the stories we pass along. And there may be no better facilitator of stories than friends gathered in a warm, inviting space enjoying a few cold beers. You’ll find that space at Breaker Brewing Company. 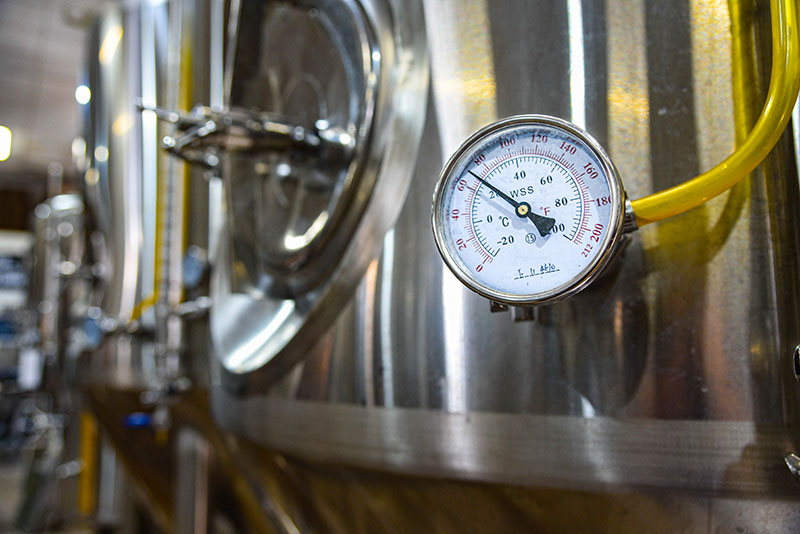 For that truly spiritual connection to beer – brew it in an old church.

Creativity is often the one thing that draws brewers toward or perhaps from the chaotic. In their minds swirls an endless, spiraling cord of possibility. Experimentation and discovery – the id and ego of the craft brewer – drive them constantly and never in the same direction. All the while, artistry, chemistry, instinct and a strong work ethic are always along for the ride.

The brewhouse exists as a point of singularity for the wild galaxy of creation inside a brewer’s mind. Perhaps this is why the order, the cleanliness, and the overwhelming sense of containment in these spaces never ceases to amaze me.

Steel tanks drawing down waterfalls of fluorescent light stand perfectly akimbo along the walls. Pressure gauges protruding like goofy scientific eyeballs direct you to explore a little more thoroughly. A warmth radiates from tanks and shots of pipe angling gracefully across the ceiling. There is no mess despite our friendly brewers’ description of their often-shambolic processes.

Given its size and scope, this brewhouse cranks out an impressive amount of beer. Sure, you might think that if you’ve seen one, you’ve seen them all. Trust me, it would be a mistake not to check this one out. Stop by any Sunday when they open the brewery doors to guests. Pull up a chair and breathe in the warm funk of a beer in the throes of creation.

And if it’s not Sunday, you’ll be in the taproom. 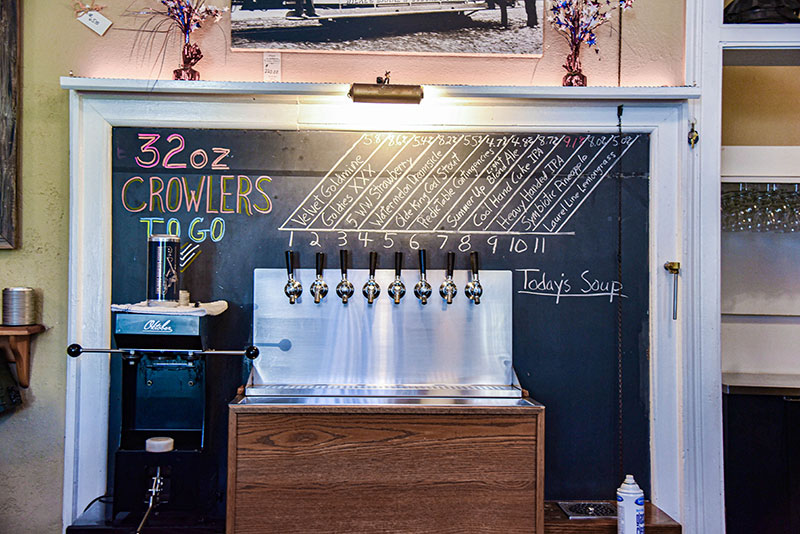 Waste not, want not.

A dedication to honoring the region’s history is never more evident than in Breaker’s classic taproom. The spacious, repurposed schoolhouse is just one example of their reverence for NEPA’s shared past.

The original, boot-scraped plank sub floors welcome every step. And after just a moment in the bar a classic craftsmanship subtly reveals itself. Natural light shuttles into the room through transom doors and tall windows. It dances elegantly from stainless steel bar taps to amber tabletops and glasses of ale. Expertly retrofitted church pews make up the bar and high tops. And the original chalkboards continue delivering the day’s lesson – Surprise! It’s beer.

This space certainly encourages the eye to wander. And the original artwork and photography nearly pull you from your stool. Post-industrial photos and whimsical brushwork contribute to an unpretentious gallery feel. In fact, all of the pieces you’ll find in and around the taproom are for sale.

In warmer weather, you just want to drink beer outside. The courtyard between the church and schoolhouse offers a breezy, pet-friendly biergarten vibe. The cozy, 40-seat patio, adorned with string lights, features intimate tables and a conversation-friendly quiet.

But enough about chairs and tables, let’s get to the grub. 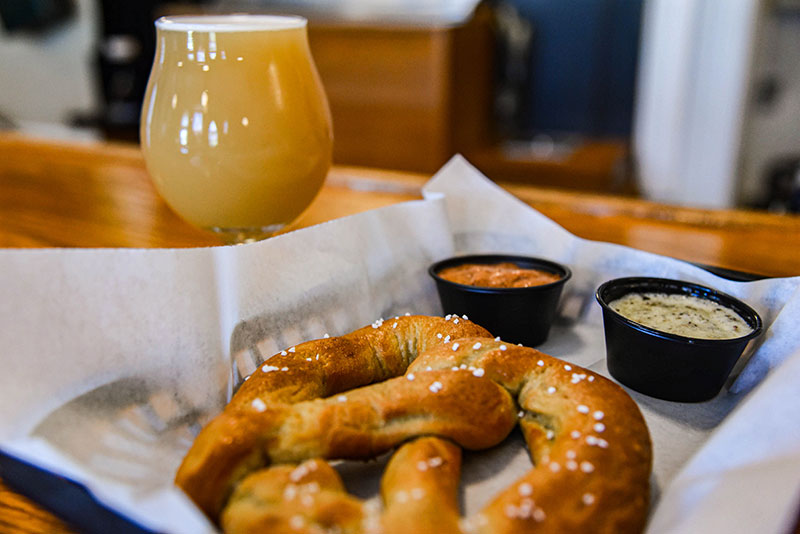 Whatcha’ got in the lunchbox?

Despite their affinity for NEPA’s coal mining heritage, the taproom menu offers more than pasty and babka. In fact, one quick glance at the menu tells a tale of meticulously designed beer-friendly cuisine. A variety of artisan pizzas, unique paninis, and quite a selection of soups, salads and appetizers make up the bulk of the menu.

If you’re here mainly for the beer, pace yourself and enjoy a few snacks. The fresh-baked, hand-rolled pretzel is the most likely place to start. This warm little pillow of salty heaven arrives with a house made mustard dip and beer cheese sauce. Real talk – I’d probably just eat several of these. They’re that good.

Now, we can’t just eat pretzels, can we? Fine. The entirety of the menu is fresh and mostly homemade. The bread for the sandwiches – homemade. Pickles – homemade. You get the point. You can’t go wrong with any option, but I will say this, if it’s available, get the Chicken and Waffles Pizza. Imagine praying for your favorite foods to fall from the sky and land on a pizza. It’s chicken, bacon, cheese, waffles, syrup and hot sauce and I get chills just thinking about it. 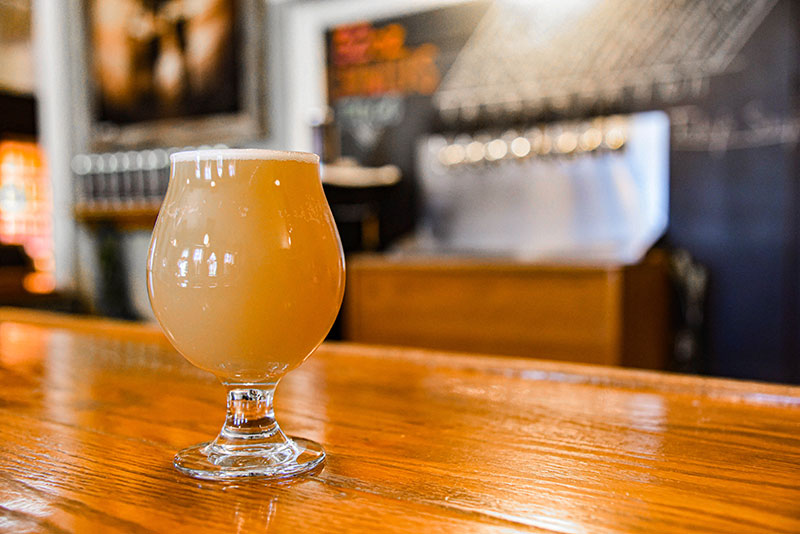 Lots of love for the IPA… (and other fine beers.)

Their name suggests a deeper connection to Northeastern Pennsylvania’s blue-collar roots. So too does their sigil, the iconic coal breaker – a once familiar site throughout the region. Perhaps no other slice of this country is more defined by a singular vocation than NEPA is by coal mining. And much like our rough and tumble forebears believed, there are few things better than a cold beer at the end of the day.

This ideal seems to be the driving force behind many of Breaker’s beers. Drinkability is key here. They are not trying to perfect every different style of beer. The IPA is their thing, and they do it well. They also occasionally pump out tasty porters, stouts or other ales.

All told, on any visit to Breaker Brewing, you can taste your way through a wide spectrum of beer. Delicate touches here and there, careful and thoughtful resting and masterful hopping offer a unique lineup that’s always sure to shake the most discerning beer palate.

Eleven rotating beers are always on tap in the main taproom. There are also at least eight in the front room half bar. On Sundays, the brewery taps also feature eight beers.

You can also get your beer to go in 4-packs of cans and fresh-filled crowlers.

Ten Year IPA – Beautifully balanced, heavily hopped, spring like, peachy and strong
Symbiotic Pineapple – Sour IPA, bright and tropical with a slight creaminess
Santa Fe Pils (out of the can) – Simple, clean pilsner, almost too drinkable, watch out for this one 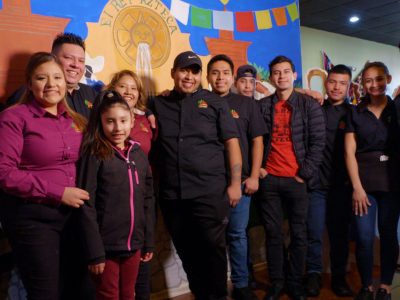 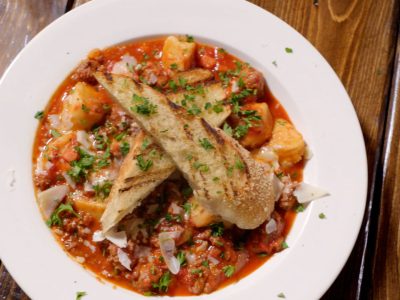 Bistro on the Avenue 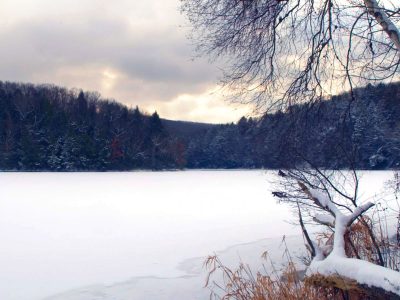